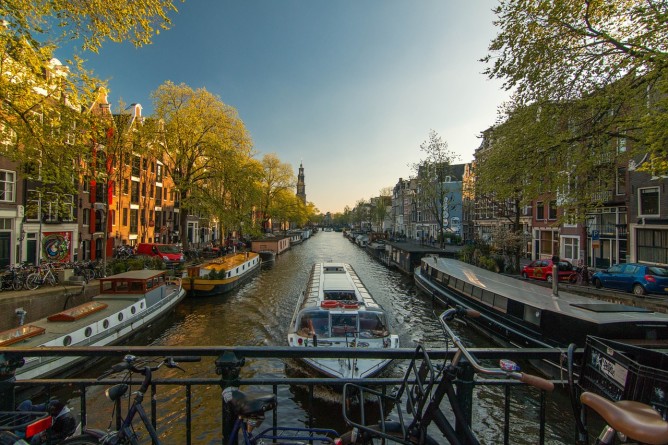 Venice has a reputation for having the most beautiful canals. But, in Holland, amidst all the tulips and some of the best beer in Europe, lies a bustling metropolis with over 150 canals (and almost that many museums) that will put Venice to shame. Yes, we are talking about Amsterdam! Amsterdam is one of Europe’s best holiday destinations for many a reason- it is the city of freedom, beauty, and knowledge, and you will never have a dull moment here!

Welcome to this beautiful city, and here are the top 5 best things to do in Amsterdam listed in arbitrary order:

This is a bucket list item for many people, and rightfully so. Amsterdam is the most cyclist friendly city in the entire world, after all. You can rent a bike from almost anywhere, and set off on your own adventure within the city. You will be able to explore way more on wheels than you would by train or tram. And the best part? It’s incredibly cheap!

Jordaan is the best neighborhood in Amsterdam for foodies. It’s an exquisitely beautiful area, filled with a number of Dutch restaurants selling delectable little treats that will leave you wanting for more. When in Jordaan, make sure you try bitterballen (fried meatballs), different varieties of cheese (the gouda is the local favorite) and poffertjes (pancakes with sugar).

You can even take a food tour of Jordaan. Four hours of binge eating the best food Amsterdam has to offer? Sounds like the best evening ever, doesn’t it?

Most people headed to Amsterdam get off their flight and directly go to the Heineken Experience. However, there is a more unique experience waiting for you, just up the canal. Hannekes Bom has been a watering hole for the locals from 1662 AD! You can reach the bar by boat, grab a beer, and just chill out with the other tourists and locals alongside the canal. Many local artists do busk in the area, so if an impromptu concert breaks out- do not be surprised!

You will be hard pressed to find a more heart-wrenching place in all of Amsterdam. When the city fell to Nazi occupation in the 1942, Anne Frank and her family went into hiding. They lived in the attic of what is now known as the Anne Frank House for 2 whole years, before they were captured and sent to the concentration camps.

You can explore Anne’s story, her life, and the pain of the Holocaust in this museum. Be prepared- this will definitely be an emotional experience.

Learn About Art at the Van Gogh Museum

Van Gogh is one of history’s most prolific and troubled artists. If you’re an art buff, you will definitely not want to miss the Van Gogh Museum. This museum is unique in many aspects- many museums around the world have exhibited Van Gogh’s works, but this one is much more than that. It celebrates the artist’s life, work, and philosophy.

Here’s an insider tip, though: book online to avoid the huge crowds that will be waiting outside the doors. You can use that time to take in Van Gogh’s self-portrait instead.

There are a million other things you could do in Amsterdam- but these 5 capture the very essence of the city, from its historical roots to its current culture. Amsterdam gifts its visitors with a renewed love for life.

So, pack your bags, and get set exploring! Which one of Amsterdam’s many attractions are you most drawn towards?