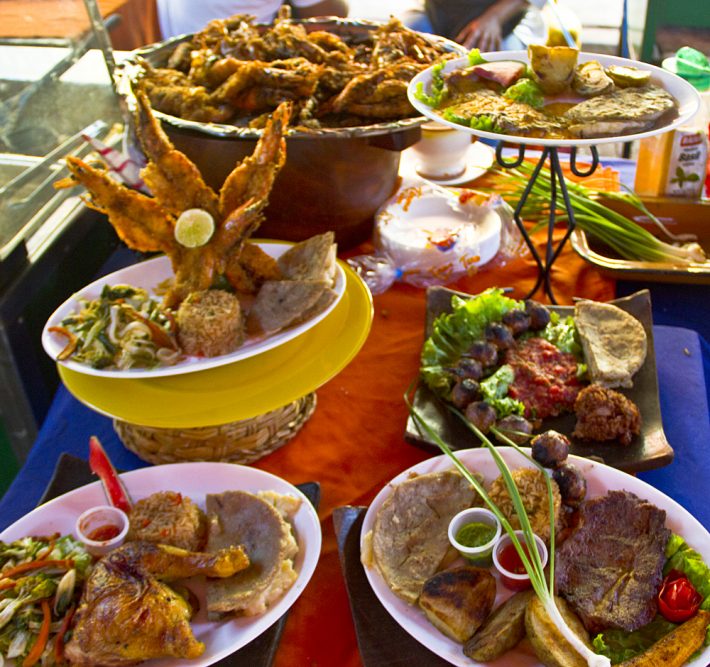 Before arriving in El Salvador I knew that each weekend there were a couple of towns on the Ruta de Las Flores (the part of the country I’m in right now) who had food festivals on the weekends and that people from all over the country attended them What I didn’t know, was that the city of Juayua was not only having their weekly food festival, but also their annual celebration of the Black Christ, and, that this was by far, their biggest celebration of the year. Of course, this intrigued my quite a bit so this El Salvador rookie made plans to make it to Juayua for the celebration. 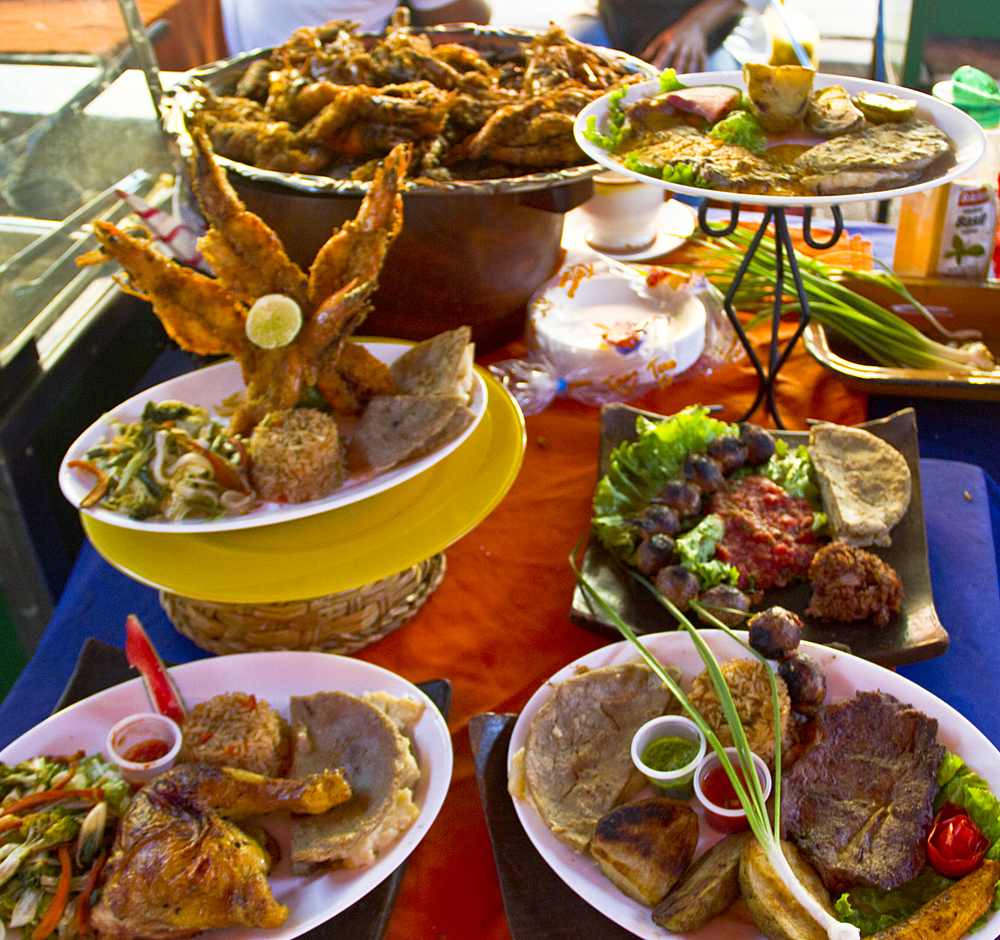 The day started with a chicken bus ride from Ataco (another town on the Ruta de Las Flores where I’m staying) to Juayua. Not surprisingly, this bus was packed. Not packed like one person in each seat, packed like two people where one should be and then another 30ish in the row. I’m no stranger to really full chicken buses, but this one would prove to be quite a test for this gringo.

The ride started with me hopping on the back of the bus to climb in through the handicapped door (keep in mind these are old U.S. school buses). The main door couldn’t really open so this was the only way in. An older man and myself were the last ones in and the guy collecting money had to literally push us in far enough that he could shut the door. I ended up partially in a poor women’s lap who I was easily twice the size of and her boyfriend/husband thought it was absolutely hilarious. A few of the other passengers urged me to move up into the aisle (out of, what I would call, the trunk) but I said I was fine, I didn’t mind being squeezed in, and, in my best Spanish, to let the women move there. They shrugged and left it at that.

Man I should have listened to them. Not everyone was going all the way to Juayua, meaning people had to get off and on this death trap of a bus. As I began to realize that 15 to 20 women and children were about to go to second base on me just to get out of the bus the other guys in the back started smiling. Before I knew it, they went into monkey action and were hoisting themselves up into the air for people to go underneath them and out of the bus. I on the other hand was just pushed aside by the crowd, further crushing the poor women beside me. I don’t think you can say “lo siento” enough to make up for what I was doing to her.

As the women and children squeezed by many of the kids had to actually hold onto my legs just to keep balance and in order get a little leverage. This was all fine with me, until this one little girl who obviously lacked coordination came along for her turn to squeeze out. Lets just say, she missed my right leg, and didn’t quite make it to my left leg… Her location, however, didn’t stop her from grabbing on with all her might. Are you getting the picture here? Ok, she was a little girl, it didn’t hurt that bad! But all guys know what I’m talking about here, when someone or something gets close to the precious jewels you go into ninja mode to try and block the attacker and you start making the most ridiculous faces in your attempt to dodge tragedy. Everyone who saw started dying laughing. This little girl had just accidentally grabbed the gringo’s crotch (I actually don’t think she noticed what had happened which doesn’t say much for me) and the gringo had about freaked out. After I recovered I laughed quite a bit as well and a few of the monkey guys patted me on the back in approval (or sympathy?).

Phew, all of that, and I hadn’t even made it to the festival yet!

Upon arrival I joined the masses (literally thousands of people) and began exploring Juayua and all it’s festival had to offer. After a few minutes of walking around though, I realized something. There were no other gringo’s here… Ok, I know there must have been some. But I seriously spent the next 20 to 30 minutes searching around to see if I could find any, and I saw about 4 (out of thousands of people!). This reality actually made for quite an enjoyable day though, as I stuck out like a sore thumb and everyone was interested in hearing my story. 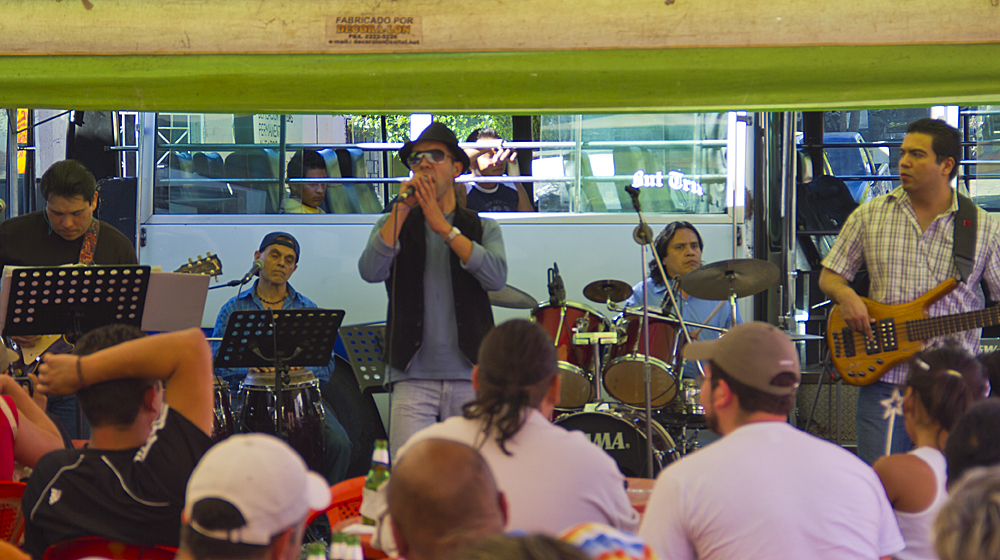 One of the first attractions I caught was a live band. They were doing some originals and a lot of U.S. rock covers. It was awesome, and I was snapping photos, as the crowd grew larger and larger. About the time when there were a few hundred people watching, and I had put away the camera so it didn’t get crushed, the singer said something with the word “gringo” in it. People started looking around as if searching for something and I just stood there with, what I assume, was the dumbest look on my face. A man leaned over and said, “he just dedicated this song to the gringo.” I laughed, raised my hands in triumph, and people laughed and cheered. The band then busted out a great rendition of Bon Jovi’s “Livin’ On a Prayer,” all for me!

I spent the rest of the day feeling like a celebrity as people continually took time out of their day to talk to me and ask me where I was from, how I was enjoying Juayua, and to tell me to make sure I stay safe around all the drunks. Hardly any of these people had actually seen the band earlier, this is just how nice the Salvadorian people are. They wanted to make sure that I, their guest, was loving every minute of being in their town. I ate dinner with a young man and his wife and son, and he repeated the message I had heard from a few others that day, to make sure that I caught the bus back to Ataco before nightfall, because it just wasn’t as safe. It was so great to feel like all of these people were looking out for me and cared about my well being. 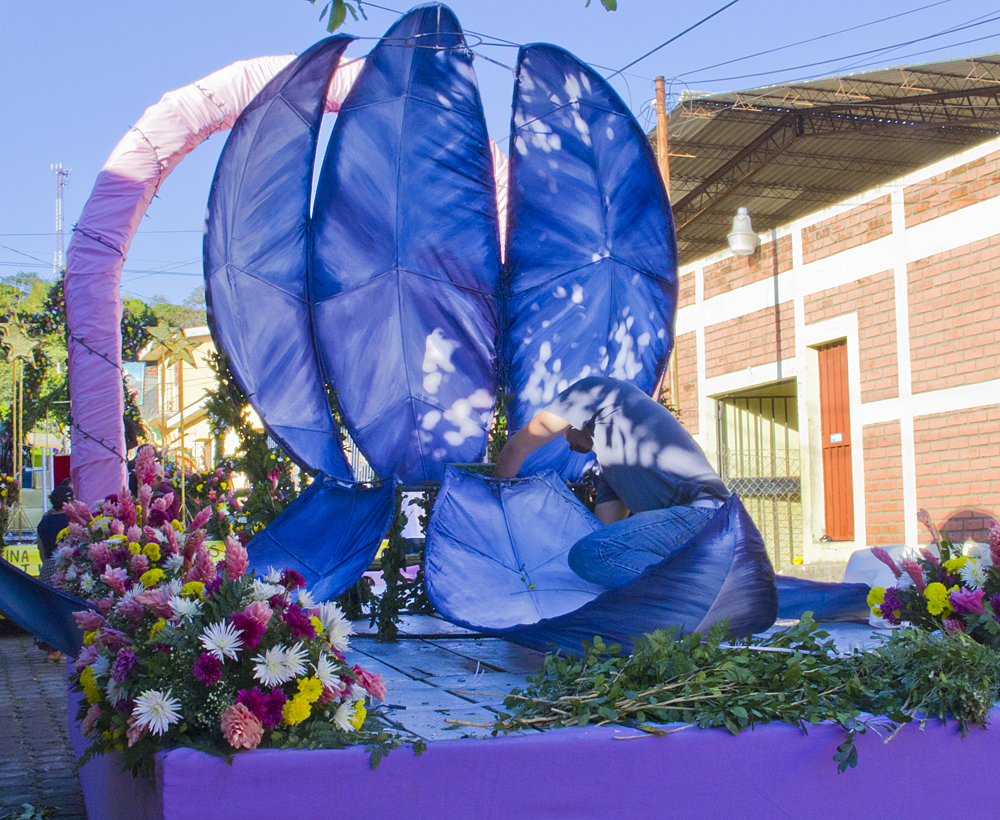 I took their advice and began to make my move towards leaving early, which meant, I was, unfortunately, going to miss the 7pm parade. I snapped some shots of the floats as they were being decorated and made my way back towards the bus area. I passed by one of the stages and the same band was still playing. They were finishing up and the crowd started chanting, what I am assuming was, “one more song! one more song!” as the band walked off stage. The band obliged and started up with a cover of Pink Floyd’s “Another Brick in the Wall.” The crowd, which had doubled in size since I had last been there, went absolutely nuts. I’m talking hands in the air, babies in the air (no kidding), people dancing everywhere, nuts. It was quite a site to see, and a great end to my first full day in El Salvador.