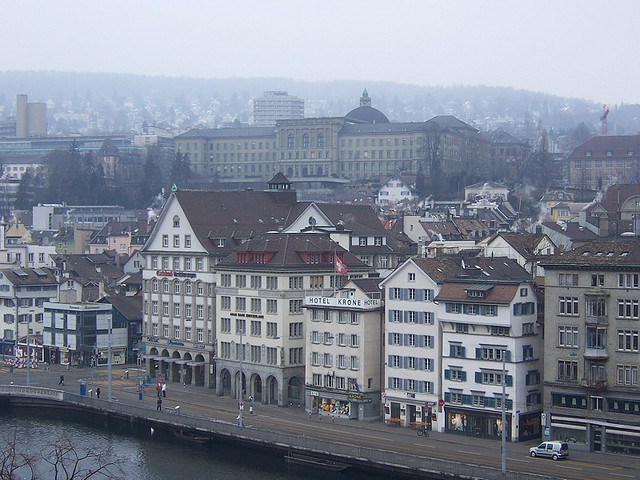 Those of you who associate Zurich solely with its â€˜gnomesâ€™ and other manifestations of wealth might be pleasantly surprised should you include it on your travel itinerary.Â  Yes, the city is a major international banking centre, the British Prime Minister, Harold Wilson, was the first person to compare its famously secretive bankers with gnomes but it also has so much more to offer.

James Joyce and Other Sights

Since I was travelling on a budget my first port of call on leaving the â€˜Hauptbahnhofâ€™ (the main train station) was to boot up the laptop and indulge in some car hire comparison as I intended to visit the surrounding countryside as well as the city itself.Â  James Joyce has always been a passion of mine, so I made my way to the Fluntern Cemetery, close to the Zoo, in order to pay my respects, I then slowly drove back to the city centre stopping off to raise a glass to the great man at the Hotel Limmatblick on Limmat Quai, the bar was the place to be seen by any of the early 1920â€™s avant garde in Zurich and was patronised by members of the Dada movement.

If you want to marvel at a stunning Art Deco interior, go and visit the nearby CafÃ© Odeon, for the last 100 years this cafÃ©, also on Limmatquai, has served Einstein, Joyce, Lenin and even Mussolini and is still a wonderful place to enjoy a coffee or the popular â€˜Kirschwasserâ€™.Â  I then made my way along the street to inspect the Kronenhalle restaurant on Ramistrasse where Joyce is reputed to have whiled away much of his time.Â  This august building still has paintings by Picasso and Miro hanging on its walls and you should sample a glass of the local wine â€˜Vaudâ€™ even if you canâ€™t afford a meal.

Zurich is easy to navigate, the roads are well marked and the fascinating Old Town or â€˜Altstadtâ€™ is a wonderful place to just indulge in a relaxing dawdle.Â  By day this area is full of cafes, tourists and locals but by night it transforms itself into a vibrant centre for clubbers and other nighthawks, try the Alte Borse and spend the night dancing with hundreds of others to a wide range of electro sounds.Â  An increasingly hip area is District 5, close to the River Sihl, I was amazed by the imagination behind â€˜Freitagâ€™ a store and brand that recycles bicycle tyres and other detritus from modern life and converts these objects into highly desirable consumer items.

Â As well as being a centre for diverse bars, cafes and other delights, Zurich is the proud possessor of 100 museums and many art galleries, this isnâ€™t to mention the numerous free studio exhibitions that take place throughout the year. Â Â One ofÂ it most visited museums isÂ Â the North America Native Museum (NONAM) which focusesÂ Â on the art and cultures of the indigenous people of Canada.Â Â (EnjoyÂ Â more of theÂ Â culture by vacationing in CanadaÂ Â they offerÂ cheap hotels, great views andÂ Â have the friendliest people.) Â The city of Zurich is also famous for its churches, the 13 Century Fraumunster, dominates the skyline and is well worth a visit. Â As well as its deeply expensive luxury hotels Zurich has many hostels to suit those of us on a more modest budget.

By: Celina Bledowska who lived in Zurich and still returns to the city.