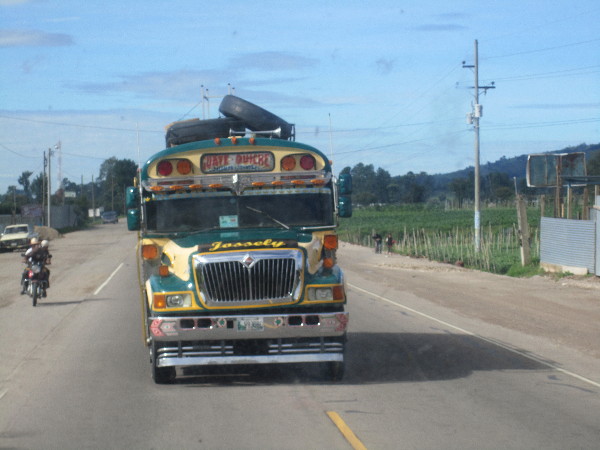 If you rode a bus to school during the 80â€™s or 90â€™s there is a slight chance I rode in one of your old buses to day.Â  Guatemala is full of chicken buses, which are basically old (presumably) U.S. school buses that have been painted extravagantly.Â  These buses are one of the main sources of transportation for locals and it is an experience that every traveler should have.

Before leaving for this trip I had read all about the chicken buses and what to expect while riding in one.Â  But reading and experiencing are two very different things.Â  First lets talk about the drivers.Â  It may not be true for all of them but the impression Iâ€™ve gotten so far is that one of the job requirements for driving a chicken bus is not giving a crap about dying.Â  It seems as though they will do just about anything to cut a second or two off of a trip.Â  This includes accelerating into turns that should not be accelerated into, passing any vehicle that is deemed as being too slow, using both lanes when making turns just because it is a little bit shorter, and worst of all, the combination of all of these things.Â  Thatâ€™s right, passing a car on a huge turn, while accelerating, using a lane that has a 50/50 chance of having another bus or vehicle in it barreling at them.Â  The best is when two drivers are doing this at the same time on the same turn, headed towards each other.Â  It makes for a great display of the power of brakes.Â  Basically, it seems that the goal of the driver is to destroy the bus as soon as possible without just driving it off a cliff.Â  Actually, Iâ€™ve heard that happens sometimesâ€¦

Besides the driver there is another guy working on the bus as well.Â  His job is to hang out the door and make sure everyone within a half of a mile knows exactly where his bus is going and trying to convince you that you need to go to that destination.Â  This guy also collects the money and climbs all over the bus.Â  Yes, he literally climbs on the outside/top of the bus to ensure that whatever luggage is there is properly secured.Â  Sometimes this guy is climbing on the top of the bus while the driver is accelerating into a turn, while passing a car, and unknowingly playing chicken with oncoming traffic.Â  Letâ€™s just say Iâ€™m glad Iâ€™m not that guy.

This morning was my first experience on a chicken bus as we caught a ride from Antigua to Panajachel on Lake Atitlan.Â  It was about 2 Â½ hours of bracing myself for sudden stops and harsh turns but it was an experience I donâ€™t regret.Â  Getting a chance to travel the way the people of a country travel is a great way to begin to get in touch with the lifestyles that they lead.Â  Granted I will not be taking a chicken bus in any of the more mountainous regions of Central America due to the lack of safety, I will definitely be riding one again soon.