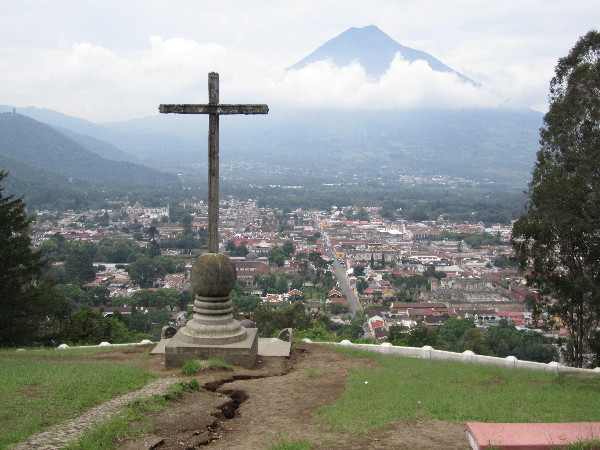 Many travelers who visit Antigua take advantage of the photo opportunity known as Cerro de la Cruz. Cerro de la Cruz is a large cross constructed on a hillside overlooking Antigua. Today I had the pleasure of visiting this location and taking in the beauty of Antigua and it’s surroundings in their entirety.

The day began with us asking locals the whats, whens, and hows of getting up the hillside. We were told that the local police would make the hike with us as a security measure, as the hill is known for petty crime. The problem with this was that we had to find the police station, and apparently no one in Antigua knows where it is… After walking the same 5 block radius for about 45 minutes we were finally directed towards a building that catered to tourists. They pointed us in the right direction and sent us on our way with promise of police at the foot of the trail who would take us up to the cross.

Upon arriving at the foot of the hill we saw a police officer and made our way towards him (the sign at the foot of the hill actually says the cross is in the opposite direction but we assumed the police meant we were in the right place). Much to my dismay however, the police officer simply told us to go on ahead, basically implying he would not be joining. After a few minutes of walking we soon realized that there were multiple officers stationed all along the trail in order to deter any potential muggers. The hike was a bit tough on this Florida boy who is used to flat hills and low altitude but once we arrived at the top the view was out of this world. I was able to snap some shots of Antigua, Cerro de la Cruz, and a statue of Santiago.