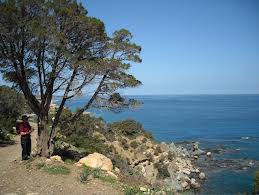 Cyprus is a wonderful destination for any holidaymaker to explore, but its varied terrain makes it especially well suited to walking trips. For solo travellers, booking a group hiking break is an excellent way to meet new people and see the best of the island.

North Cyprus is not as frequently visited as the south, making it an excellent choice if you’re keen to escape the crowds. Here are just a few of the main reasons why this region of Cyprus is a great choice forÂ solo adventure travel:

From glorious coastal scenes to dramatic mountains, north Cyprus has it all. From your base just outside Kyrenia, you can look forward to exploring the mountains and coast in equal measure. The following are a selection of the walking trails you can tackle during a getaway in the area.

â€¢ Hike to Bellapais villageÂ – This circular route will lead you into the Besparmak Mountains and see you steadily climb until you reach Bellapais, home not only to a charming village, but also a famous monastery of the same name. The walk is not particularly long or strenuous, making it ideal to get you into the swing of things.
â€¢ Walk to Buffavento CastleÂ – Buffavento Castle is the highest fortress in northern Cyprus, perched 950 m above sea level in the mountains. As you get closer to the enclave, you’ll be rewarded with ever-improving views. If you’ve got a head for heights, the panoramas from the castle’s tallest tower are outstanding, allowing you to see half of the island on a clear day.
â€¢ Explore the Kirpasa PeninsulaÂ – Located in the north-east of Cyprus, the Kirpasa Peninsula is a lovely coastal region that is best discovered on foot. A vast number of plant species can be found in the area – around 1,600 – as well as 350 types of bird. Keep your eyes open for the endangered wild donkeys that also live in the peninsula. Round off your day of walking with an hour or two at one of the wonderful sandy beaches.

As you walk around north Cyprus it is hard to avoid the island’s history, as there are so many castles, villages and monasteries waiting to be explored. It’s easy to incorporate visits to these in your walks, as you can tell from the above suggestions. Here are just a few places you shouldn’t miss.

â€¢ Bellapais AbbeyÂ – The ruins of this religious site are well worth exploring, with much of its 12th century, Gothic architecture still intact. The history of the monks who used to live here is also fascinating, as many of them took wives in the mid-16th century and would only accept their own children as novices at the establishment.
â€¢ Kantara CastleÂ – Situated in the western end of the Kirpasa Peninsula, Kantara Castle is an excellent place to explore. It is perched in the mountains and was used to guard the entrance to the peninsula. It has been involved in its fair share of conflicts over the years, including being where Richard the Lionheart defeated the then-ruler of Cyprus Isaac Komnenos in the 12th century.
â€¢ Kyrenia CastleÂ – Located next to the city’s harbour is this ancient castle, which has been extended over the years and exhibits a range of building styles. It also houses the Shipwreck Museum, where you can view the remains of one of the oldest ships to be salvaged from the sea – a wooden merchant ship dating from around 306 BC, which had a cargo of olives and almonds contained in large amphorae.