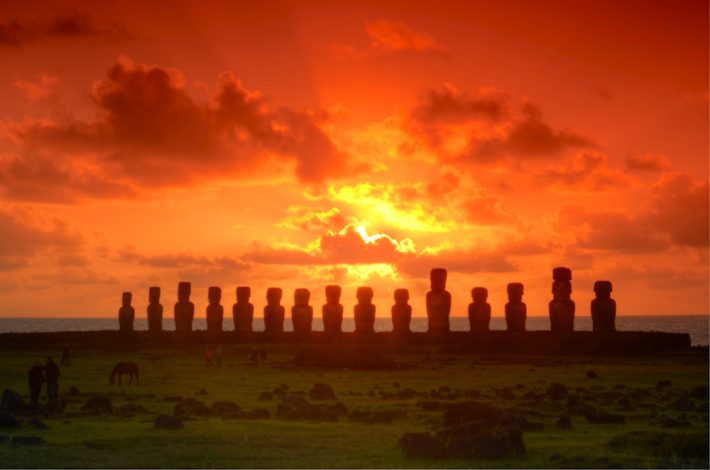 Easter Island is an ecological gem and lies isolated in the South Pacific Ocean some 3.5 kms off the coast of central Chile. The climate is mild  due to it’s exposure to the ocean. Temperatures can vary and the average is 18c from June onwards to 24c in the summer months of January to May. Rainfall is all year long the heavier falls in the hot monsoon period and humidity is constant  at around 80%.

HOW TO GET THERE
LAN Airlines flies daily,except Tuesday to the Island from Santiago in Chile flight time being an average of 6 hours. There is also a flight once a week from Tahiti. Should you encounter any difficulties while on the Island LAN Airlines has an office in  Hanga Roa who will be pleased to assist. It is  important that departure times are strictly adhered to so leave nothing to chance. Once on the Island the best way of getting around is by using a reputable tour company,ask at your hotel.
WHAT TO SEE
Legend has it that the original inhabitants came from Taiwan thousands of years ago, but what is known, is that the Island was settled  by the Polynesians some one thousand years ago. They discovered a lush rain forest that provided for their every needs from clothing , building materials for homes and canoes and food along with the fruits of the ocean. The Island now denuded of it’s trees of which many were said to have been cut down to enable the transport of the Moai (giant heads) that had been quarried and carved  to various villages and placed as sentries to ward off evil spirits.Over the centuries the deforestation meant a lack of natural resources which led to infighting sometimes very violent in some cases leading to canabalism, this is symbolised by the beheaded Moai you will see at some of the sites. This combined with raids from other cultures such as the Peruvians led to the eventual decline and fall of this proud island nation. The now dormant volcanoes and the defunct quarry are testament to the Island’s shroud of mystery which attracts today’s traveller just as it did for the Dutch expedition who on Easter Sunday 1722 discovered and christened with it’s modern day name.
SHOPPING
As you would expect the shopping is not for the fashion follower rather it the arts and crafts made by local artisans. Every tourist site has vendors displaying their wares but it is probably cheaper in Hanga Roa and you don’t have to carry anything around all day.