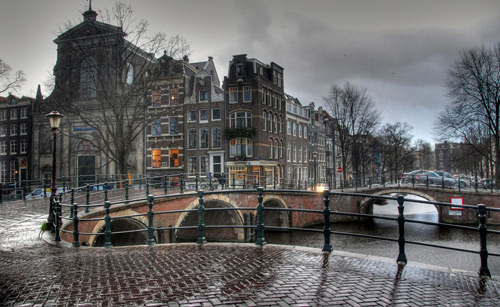 Amsterdam is a beautiful city located in the Netherlands, nestled between Germany and Belgium. Most popular for their history in trading with surrounding countries, they were aware of the importance of embracing all sorts of cultures.Â Today, Amsterdam preserves its original goal as a tolerant society, continually bringing in people from all over the world! And although Amsterdam is a very busy tourist destination it is easy to book authentic holiday apartments in Amsterdam.

A really fun way of getting to know about a place you are visiting is by reading interesting facts!

1.Â Why do the buildings lean to one side one might ask? Amsterdam was built on long wooden poles driven into the ground!

2.Â The population of Amsterdam is around 760,000 and there are nearly a million bikes. That means there are more bikes than people! There are also twice as many bikes then cars. Inhale the fresh air!

3.Â Want to ride one of those million bikes? There are more than 15,000km of bike lanes to choose from in Holland!

4.Â Museums are everywhere in Amsterdam. It has moreÂ museumsÂ per square meter than any other in the entire world.

5.Â During Amsterdamâ€™s Golden age, researchers have estimated over 5 million paintings created; including the famous Rijks andÂ Van Gogh which both have their own museums. You can check out the Rijks museum and the Van Gogh museum on your visit!

6.Â Amsterdam has 1,200 bridges and 165 canals making it known as the Venice of the North. Take a boat tour!

7.Â About 2,500 houseboats run along the canals where locals live. There is even one for cats called the â€œPoezenboot.â€ Visit theÂ houseboat museumÂ or evenÂ stay on a houseboatÂ during your stay.

8.Â Amsterdam is the gay and lesbian capital of Europe since it was the first capital city to allow gay marriage when the Netherlands adopted the law in 2001.

9.Â The name â€œAmsterdamâ€ actually comes from theÂ river â€œAmstelâ€Â and the Dam constructed to create the city!

10.Â Feeling short walking around the city? Donâ€™t sweat it, Dutch people are the tallest in Europe and the worlds 2nd tallest.

The facts donâ€™t do Amsterdam justice. One must simply go to see the melting pot culture that affects the music, art, and food in the best way possible. If youâ€™re looking to travel or are already a travel bug yourself and havenâ€™t visited, pin this on your world map, write it down on the bucket list, invite family, friends or both and visit this exciting and stunning city of Northern Europe.