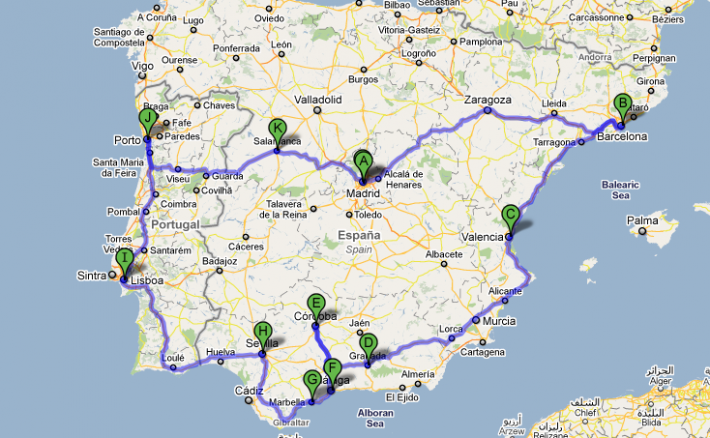 Two weeks from today, my girlfriend Danielle and I will be preparing to board our red eye flight from Miami, Florida to Madrid, Spain for the start of what could potentially be a 3 1/2 to 4 month trip. The initial plan right now is to spend the first month in Spain and Portugal before heading north (more on this later in the post) for the remainder of the trip. So, with two weeks left before our departure I thought I’d lay out a potential itinerary. I did the same thing before my last trip and I ended up visiting quite a few of the places I had planned, and it was a cool post to look back on throughout and after the trip. With that in mind, I hope this post generates the same response with suggestions of things to see and places to go, and if you see something you think is overrated I’d love to hear your opinion about it. Hearing from people who have already been there is by far my favorite way to plan my travels, and although this will probably only serve as a rough guide as we will almost certainly cut and add different stops along the way, I feel this is a good start. 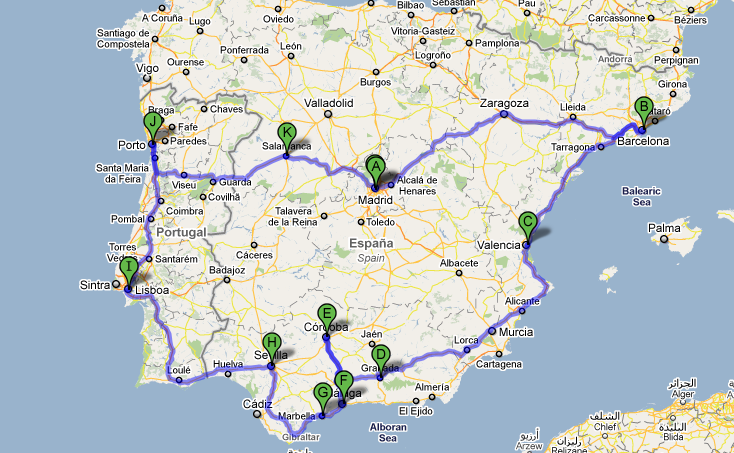 Spain
-We’ll fly into Madrid(A) where we’ll spend a few days getting acquainted with both a new country and a new time zone. I’ve had lots of suggestions on things to see here (like day trips to Toledo, Avila, or Segovia) and if we end up loving the city, we’ll stick around for awhile. To be honest though, the things I keep hearing about Barcelona(B), our second stop, sounds like a city we might fall in love with.
-So yea, jumped ahead there, but after Madrid(A) we’ll take a bus or train to the Barcelona(B) area for what I’m anticipating will be our longest stop of this leg of the trip. With all of the incredible architecture and the beach right there, man… if this turns out how I think it will be, maybe we’ll just stay here!
-After Barcelona(B) we’ll head down the coast to Valencia(C). Don’t know much about this city, but I’ve heard we should stop there. Assuming we aren’t way behind on time already (I HAVE to get to Portugal at some point) we’ll check it out.
-After Valencia we’ve got some decisions to make. I’ve heard great things about Granada(D), Cordoba (E), and Malaga(F). Where exactly we go and how long we stay will depend on how long we’ve spent in our first few stops.
-Even though Marbella(G) is not normally a “backpacker” stop and is more of a resort area, we’ll be stopping here to meet some people who work for a new company I’ve gotten involved with. There will hopefully be a few “work days” for me here but we’ll try to take in some of the sights without spending a million doll… sorry, a million euros.
-After Marbella we’ll head towards Portugal with a stop in Sevilla(H). I’ve heard so many great things about Sevilla that we might have to make this stop a bit longer than some of the others.

Portugal
-Our first planned stop in Portugal is Lisboa(I) or, Lisbon, as the English speaking world knows it. There are quite a few places we can day trip to from here, but I’m really looking forward to experiencing, what I’ve heard, is an awesome nightlife.
-After Lisboa(I) we’ll head towards Porto(J) where we will enjoy some port! Now, I’ve only placed two different stops in Portugal, but the reality is everything is so damn close together, we will be able to EASILY go to lots of different places from these two “hub” cities. We’ll see how much time we’ve got.

Back to Spain
-After our time in Portugal we’ll head back to Madrid (I’ll explain why below). If we’ve got time we’ll stop in Salamanca(K) which has been described to me as a cool college town, aka, a good time!
-Then, back to Madrid for whatever time we’ve got left.

So, the reason we are heading back to Madrid is because of the next step in our plan. First a little background. If you’ve read my “About” section then you know one of my jobs is teaching an LSAT (test to get into law school) prep class. I’ve currently been offered the opportunity to teach a class that is held in London starting in mid July. Right now our plan is to fly from Madrid to London where we will rent a place for 2 1/2 months while I teach this class. The class will only be held two days a week, so we will use my off time to jet set around Wester Europe via the super cheap and somewhat crappy (so I’ve been told) airline of Ryan Air.

It is not 100% certain that this class in London will happen, but I’d like it to so I’ll be optimistic. If it does this will put us in London until the very last days of September. If this class does not run, then we’ll be backpacking north through the basque country of Spain and France towards Belgium, and eventually the UK. So, obviously, this part of the trip is all up in the air and we’ll see what happens.

So there you have it. Our plan. It will probably change 100 times before our month in Spain and Portugal is complete, which is exactly what I want! That, my friends, is the beauty of travel.