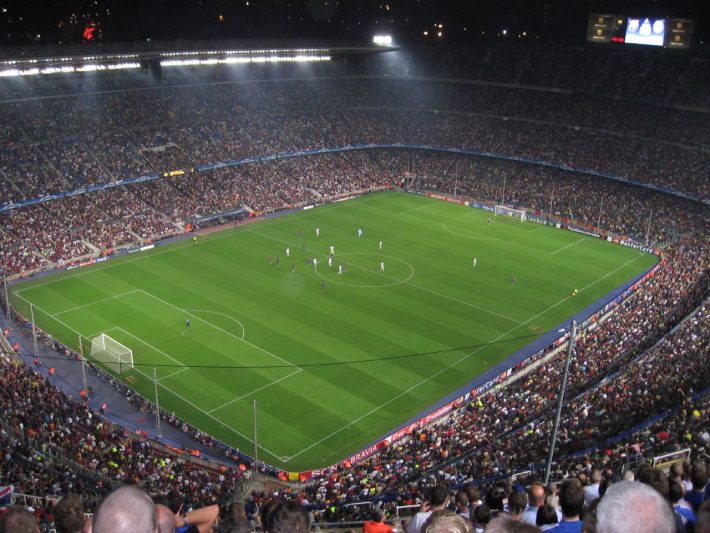 Barcelona is one of Spainâ€™s most exciting cities for sports fans, home to numerous world-class sporting venues, as well as offering plenty of opportunities for visitors to get active during their holiday. Weâ€™re going to have a look at how you can get under the skin of Barcelonaâ€™s sporting heritage, in addition to giving you some tips on how to get involved – if youâ€™ve got the energy. Camp Nou is one of the worldâ€™s most famous football stadiums, home to the legendary Barcelona FC. The Camp Nou experience is a must for avid fans of the â€˜beautiful gameâ€™, as it gives you the chance to explore behind the scenes of the stadium, visit the trophy room to see the silverware, and wander around the museum detailing the clubâ€™s long and illustrious history.

Of course, this isnâ€™t the only way to experience Camp Nou – in fact, the best way to fully appreciate its splendour is to get tickets for a home game and soak up the atmosphere among the lively fans.

Camp Nou isnâ€™t the only place where you can delve into Barcelonaâ€™s – and Spainâ€™s – sporting heritage. There are two outstanding sports museums in the city, both of which are worth a visit.

The Museu i Centre dâ€™Estudis de lâ€™Esport Doctor Melcior Colet is located in the Eixample district and is home to a fascinating collection of sport-related memorabilia, photos and other items linked to Catalan sporting achievements in particular.

Among the exhibits here are a signed photo from the Spanish Cup Final of 1942, Ricardo Zamoraâ€™s trophies and even a painting of Spanish gymnastics from 1862. Thereâ€™s also an extensive section of the museum dedicated to the Olympics, where you can see medals and learn more about Catalan athletes who have triumphed at the Games.

The Museu Olimpic i de lâ€™Esport Joan A Samaranch is situated on Montjuic Hill and is dedicated to the Olympics – and more specifically to the 1992 Games hosted by Barcelona. There are state-of-the-art exhibits here to bring the various sports included in the Olympics to life, and there are several multimedia installations for visitors to enjoy as well.

There is also an interesting permanent exhibition about all the cities that have hosted the Summer Games since 1992 – it even includes information about the 2012 Olympics in London.

Getting active in Barcelona

If those museums inspire you to get active during your holiday in Barcelona, you wonâ€™t be short of things to try. As the city is right next to the coast, there are ample opportunities to have a go at water sports, including sailing, windsurfing, scuba diving and kayaking.

Back on dry land, you wonâ€™t struggle to find options for getting active either. Cycling and in-line skating are great ways to not only get the blood pumping, but to also see a bit more of the city during your stay. Alternatively, you can head out of the city centre to go hiking in the beautiful Catalan countryside.

Other sports that are readily available in Barcelona include tennis, golf and football, so there really is something for everyone on a holiday in the city.

If you need to find accommodation for your sport-themed break, check out the deals onÂ HotelopiaÂ to see if you could bag a bargain and free up a bit more cash to spend on various sporting activities.