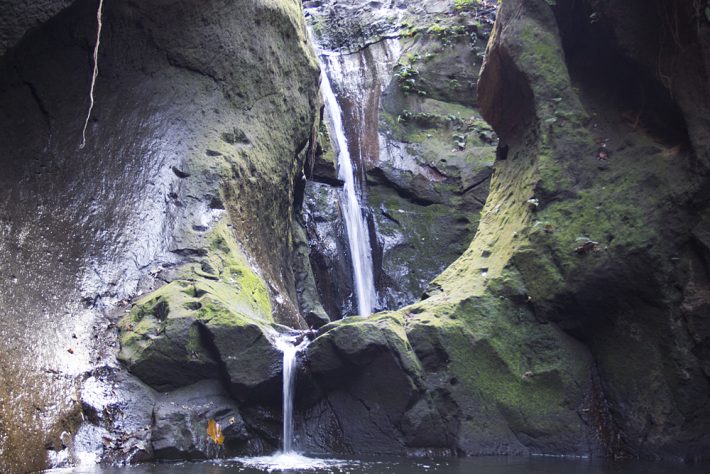 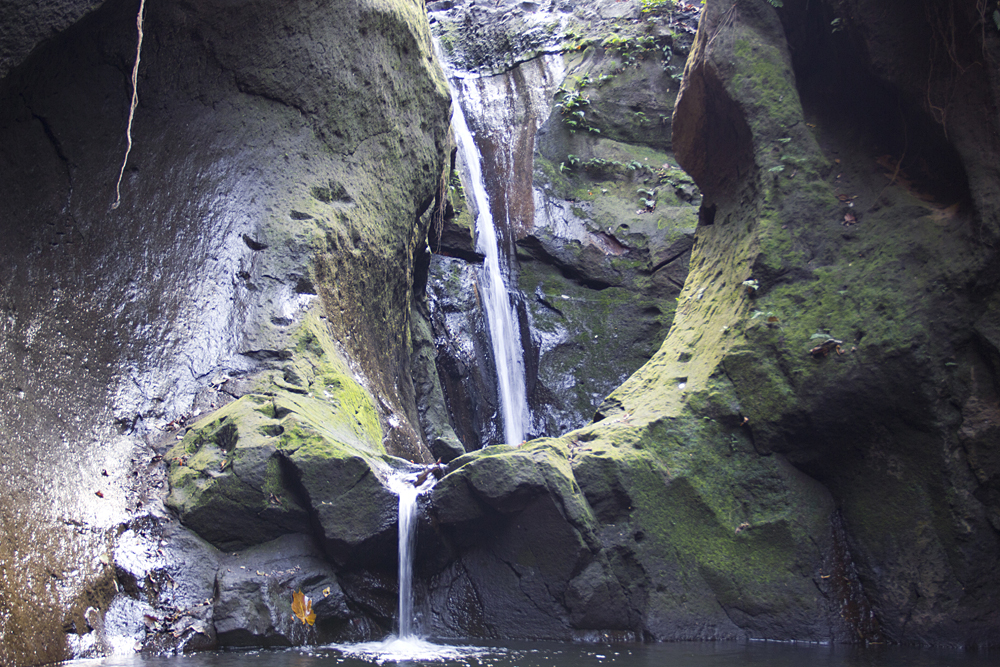 I spent the majority of this past week in the town of Suchitoto, near the Honduran border of El Salvador. Suchitoto is famous for its art exhibits, its stunning views of Lake Suchitlan, and the surrounding waterfalls not too far from town. Earlier this week I took a trip to two of these waterfalls with the son-in-law of my couchsurfing host (Host #3 in El Salvador) acting as my guide.

The first fall we visited was Los Tersios, which is the most famous of the surrounding falls, known for its impressive rock formations. Unfortunately, the fall is dry for most of the year, including now, but I was still able to get some cool shots of the rocks, which Iâ€™ll post later. The second of the two falls was called El Cubo. This fall had plenty of water and made for a great area for swimming and waterfall jumping.

Upon arriving at the second fall (the one WITH water), I began to look around for a place where I could get a good shot of the waterfall. After quite an internal debate I realized I was going to have to get into the water with my camera and wade over to another area in order to get any sort of angle of the waterfall. I took off my shirt and sandals and emptied my pockets of anything that couldnâ€™t get wet, and began my trek into the shallow parts of the water, heading towards my goal. I was seriously nervous about my camera. There were so many rocks that were coming loose beneath my feet, and all it would take is one big one for me to lose my balance and drop my camera in the water. It was at this moment that I coined what would become my motto for the day, â€œScrew it, Iâ€™ve got insurance.â€

On top of this, the water was freezing. Each time I went a bit deeper I had to stop, make a ridiculous girly face, and talk myself into continuing. Eventually the water was mid thigh, and I was NOT looking forward to the next few steps that would eventually result in the submersion of some things that donâ€™t do well in cold water. I toughed it up and kept going towards my destination, which ended up being waist deep water.

About this time I noticed tightness around my waist. Crap, are you kidding me? This bathing suit fit me perfect before I left, and I havenâ€™t been drinking THAT much beer! Can I seriously be gaining weight? I reached down to adjust my drawstring with my free hand, and thatâ€™s when I realized it.

You have got to be FREAKING kidding me. The tightness I had felt wasnâ€™t my bathing suitâ€¦. It was my money belt. Yea, my money belt, with most of my cash, my credit cards, all my itinerary info, written directions for a bus route, proof of insurance, and, worst of all, my passport. I had forgotten to take it off before I got in the water. My heart sank. My money belt came with a waterproof zip lock feature, but I had taken it out long ago because it was bulky, and hey, when the hell would I ever need that? All I could picture now was the ink from all of my entry and exit stamps running all over my passport and ruining it. I pulled off the belt and rushed back to shore to try and salvage what I could.

My money â€“ Completely soakedâ€¦ But money can dry, no big deal.

My itinerary and other documents â€“ ruined, but these can all be reprinted.

And finally, I see my passport. Buried beneath everything else, and lying in a small pool of water, I can only imagine the worst-case scenarioâ€¦ I pull out my passport, with a few dollar bills stuck to it, and start to wipe off the outside. I open it, expecting the worst, and am so relieved to see that none of the pages were damaged at all! The dollar bills on the outside had soaked up most of the water that got that far into the pouch and the rest had remained on the plastic exterior or had just barely dampened the corners of pages! I was so relieved that my dumbass mistake hadnâ€™t completely screwed me over.

But, I still had to jump off a waterfall.

After saving my passport and putting my camera safely back into my bag I asked my guide where we would be jumping. He motioned in the direction I had just come from, and pointed at the second fall from where we stood. â€œOk, well what should I do with thisâ€ as I gestured to my bag. â€œItâ€™s Ok!â€, he replied. â€œWait what?!?â€ I just saved my passport from destruction and now Iâ€™m just going to leave it sitting here on the bank of a river with my camera and bag too? After a few minutes of being reassured that it would be fine I went against my better judgment and started to swim away from my bag (maybe this should still be under the â€œStupidâ€ headline). I was continuously looking back at the bag and the area around it, looking for a sign of anyone at all, as if Iâ€™d be able to magically teleport back and stop a thief. We reached the first portion of climbing that would get us to a second pool and the second fall, and it was here I finally saw where we were headed.

â€œYou have got to be kidding me.â€ I said. â€œIâ€™m sorry man, there is no way I can jump off.â€ Now, I donâ€™t want to seem like a wuss here. It wasnâ€™t the jump that worried me; it was the mountain climbing expedition I was going to have to go on to get to the spot to jump. My guide quickly swam over and scaled the completely vertical wall using the dug out hand and foot holes (that were obviously made for children) to show me how easy it was. Yeaâ€¦ easy for him. I probably had 50 pounds and 4 or 5 shoe sizes on this guy, and could not possibly fit my feet into a vast majority of those holes.

Our solution was for him to climb behind me and to cup his hands for my feet whenever the holes were too small. I scaled the wall in record setting time (the record for slowest ever). When I reached the top, I took one last look at my bag to make sure it was still there. I surveyed the dark water trying to remember where I was supposed to jump to avoid any rocks, which enticed images of me impaling myself into my head. I snapped out of it, repeated my motto for the day, and jumped.