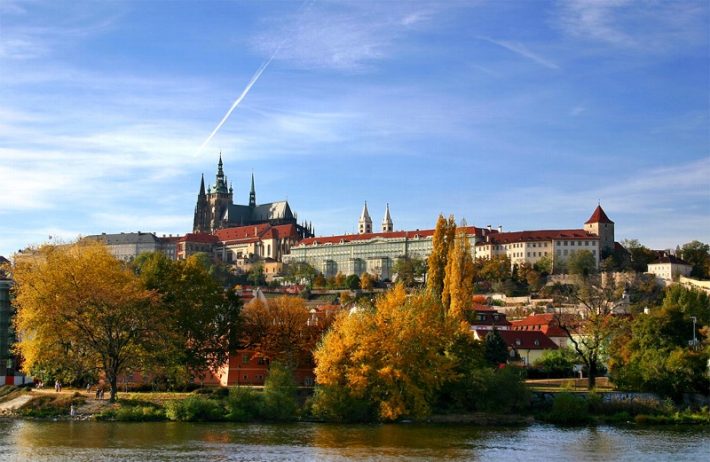 This week is the inaugural post of my new series, “Top Ten Tuesdays“. This series will be done entirely by guest posts on an invite only basis as I mentioned in my most recent post. Hopefully I’ll be able to put one of these up every single week, especially while I am not traveling, and then once returning to traveling I’ll decide how much I like them and whether or not to keep them around. This first post is by Kirk Shackleton, enjoy!

Prague has experienced something of a renaissance in recent years, since the fall of the Communism in 1989, the Velvet Revolution that placed the city in pole position to become the capital of the new Czech Republic in 1993, and finally since joining the EU in 2004. It is now one of Europeâ€™s most popular destinations, and sits at the forefront of the current boom in travel to Eastern Europe, rarely failing to send its tourists away without a smile on their face and a striking impression imprinted upon their minds. Here are the top ten things to see in the cityâ€¦

Prague Castle
Whether you view it from the bank of the Old Town or from Charles Bridge, Prague Castle and its surrounding complex stands out as the cityâ€™s greatest emblem. The site is the seat of the Czech President, the location of the imposingly gothic Cathedral of Saint Vitus, the resting place of numerous Czech kings and home to the Czech crown jewels. The nearby Church of Saint George, an attractive combination of roman and baroque architecture built in the 12th century, also merits attention, as does the jaw-droppingly picturesque Golden Lane, the Old Royal Palace, and the stunning Royal Summer Palace which is surrounded by beautiful gardens.

The Astronomical Clock and Old Town Square
One of Pragueâ€™s most distinctive sights, the astronomical clock is the focal point of Old Town Square, which, in turn, is the focal point of the cityâ€™s maze of narrow cobbled streets, and has been host to countless demonstrations, celebrations and royal processions. The clock itself was installed in 1410, and still works today, with 12 apostolic statues appearing on the hour, every hour of the day, and dials representing astronomical forms such as the sun and moon.
The square centres on a statue of Jan Hus, a religious reformer who spanned the 14th and 15th centuries, around which sit the churches of Saint Nicholas and Our Lady before Tyn, as well as the Old Town Hall, all of which are striking architectural masterpieces. They can all be appreciated from the many restaurants and cafÃ©s that surround the square.

Charles Bridge
Pragueâ€™s oldest bridge, which spans a slightly crooked half kilometre, is said to be one of the most romantic places in the world. Lined with baroque statues that are hundreds of years old, a walk across Charles Bridge feels like a step back in time, connecting the Old Town to the Lesser Town, with each side announced by imposing bridge towers. The bridge is a hive of activity, with artists, musicians, jugglers and vendors all competing for the attention of tourists each day.

Vysehrad
At the heart of the castle and grounds of Vysehrad sits the Church of Saints Peter and Paul, with colossal entrance doors and gothic windows that are wonderfully striking and evocative. However, the true magic of this corner of Prague is the tranquil atmosphere and views that are afforded of Prague Castle and the city in one direction, and the majestic Vltava River in the other.

Josefov â€“ Jewish Quarter
Pragueâ€™s Jewish Quarter sits in the centre of the historic Old Town, and is the smallest independently governed quarter in the city. But it is also one of the most ancient and beautiful parts of Prague, with a history that dates back one thousand years, when the first Jewish people began to settle in the city. The most significant person in the development of Josefov was Mordechai Maisel, a finance minister who poured a significant amount of money into the area in its formative years. Of particular note are the High, Klausen, Maisel and Pinkas Synagogues, all dating from the 16th century, and the oxymoronically names Old New Synagogue which was built in 1270.

Wenceslas Square
Wenceslas Square is less of a square, more of an avenue, originally used as a horse market but eventually expanded into the grand UNESCO World Heritage Site it is today. A fit of romantic nationalism in 19th century saw the square named in honour of the patron saint of Bohemia, and the creation of the colossal horse statue and neoclassical museum which dominate today. Wenceslas Square is used for protests, celebrations and demonstrations, and has seen numerous significant speeches and episodes in recent history.

National Theatre
Pragueâ€™s National Theatre is a testament to the will and perseverance of its people, and their desire to build a theatre of which they could all be proud. Opened on June 11 1881, after Pragueâ€™s own people had raised the money to fund the project, the theatre was tragically consumed by a devastating fire just two months later. The building was reconstructed and opened again in November 1883, and has functioned as one of the worldâ€™s premiere entertainment venues ever since, bringing the finest opera, ballet and plays to Prague at affordable prices every season.

Strahov Monastery
Just a short walk from the main entrance to Prague Castle, Strahov Monastery is a beautiful attraction which overlooks Mala Strana, the focal point of dining in Prague, and the surrounding cityscape. Originally built in 1140 as a modest stone monastery for 12 monks, the building was affected by fire in 1258 and further disaster when the citizens of Prague attacked in 1420. A succession of abbots gradually strengthened and expanded the monastery, developing it into its current splendour, particularly evocative during mass on weekdays and Sundays.

Boat Trip on the Vltava
There are a number of cruises along the Vltava River which offer a different perspective on Prague, Czech Republicâ€™s most beautiful city. Trips take place at day and night, and can be as short as one hour for those with less time to spare. Best of all, they are a reprise from the hustle and bustle of the cityâ€™s streets, the constant traffic and noise that can make a day of sightseeing tiresome. The boats feature informative commentary which enhances the experience.

Troja Chateau and nearby Botanical Gardens
One of Pragueâ€™s little known treasures, Troja Chateau is a small castle that was named after the ancient Battle of Troy, and is admired, among other things, for its magnificent staircases. The building of the chateau began in 1678, but, typically for building construction in Prague, the completion of the project suffered a setback due to the great plague epidemic of 1685. Designed predominantly in the style of an Italian summer villa, the chateau is decorated with astonishing frescoes and paintings that are lit sympathetically by natural light afforded by the large windows that were architecturally fashionable at the time.