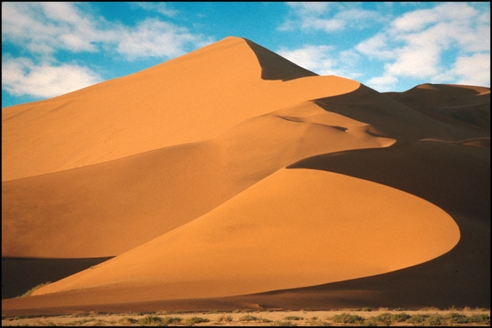 Welcome to this week’s “Top Ten Tuesdays” post. Today we are being treated to a list of the top ten things to do in the African country of Namibia thanks to Kirk Shackleton. Enjoy!

Namibia is Southern Africaâ€™s only country beginning with N. Fact. It is also one of Africaâ€™s most exotic travel destinations, and home to some of the most dramatic dry land in the world. Why should you go there? Because it is one of the few places of earth which is yet to be graced by tourismâ€™s chubby stamp. Here are the top ten things to see when you visitâ€¦

Etosha National Park
Encompassing an area of nearly 23,000 km2 at the top of Namibia, Etosha National Park is one of Africaâ€™s largest game reserves, home to more than 114 species of mammal that can often be spotted refreshing themselves around one of the areas numerous waterholes. The area appeals to all lovers of nature, from those experiencing Africa for the first time, to professional wildlife photographers who return time and time again.

Sossusvlei
Soussusvlei is similar to Mississippi in that it has four Sâ€™s in its name. Otherwise itâ€™s completely different. Looking a bit like a muddy oasis in the middle of a desert, Sossusvlei is a salt and clay pan surrounded by towering sand dunes that look like theyâ€™ve jumped straight out of Arabian Nights. It is these banks of sand that are the real attraction here, drawing in swarms of photographers for whom the effects of light on the dunes at sunrise and sunset are akin to a train spotter catching glimpse of a steam engine.

Twyfelfontein
Twyfelfontein is a somewhat inauspicious Afrikaan word that means â€˜doubtful fountainâ€™, but thereâ€™s no doubt that this is one of the most important places to head once you arrive in Namibia. The countryâ€™s first UNESCO World Heritage Site preserves around 2,000 paintings and engravings upon the rock faces of its mountains, traces left by the nomadic San and Damara people that lived in Namibia an estimated 6,000 years ago.

Caprivi Wetlands
The Caprivi Wetlands sound like they might almost be Italian. Almost, but not quite. In fact, like most things in Namibia, the Wetlands couldnâ€™t be more different to anything youâ€™ll find in Europe. Nor can they be likened to the rest of Namibia, for that matter. Four large rivers mark the boundaries of this swamp region, which, in turn, mark the boundaries between Namibia and its neighbours. The result is an area bulging with wildlife, lush tropical vegetation, and a great many cultures for whom these waterways are home.

Skeleton Coast
The Skeleton Coast is a pristine section of Namibiaâ€™s northern crust that stretches between the Ugab and Kunene rivers, and is easier to access from the south than the north. Its name is apt; this area has seen a number of miseries and shipwrecks, along with a number of incredible adaptations by Mother Nature to an isolated and barren landscape that is truly off the beaten track.

Fish River Canyon
Fish River Canyon sprawls across Namibia like the branches of a leafless tree, but you can only really appreciate this from above, which is probably why these kind of places are so often circled by gigantic birds of prey â€“ theyâ€™re enjoying the view. It is claimed that hiking this canyon is one of the top 5 most challenging things to do in Africa; if youâ€™ve ever tried hiking a canyon, youâ€™ll probably agree. Keep an eye out for interesting rocks, if you like rocks.

Kalahari Desert
Some people say the Kalahari Desert is underrated, and itâ€™s easy to see why. Endless undulations of red sand dunes are punctuated only sporadically by grass plains, the equivalent of a sand pit the size of Texas with a few fields dotted here and there. Thatâ€™s about it. But because itâ€™s underrated few tourists go there, and thatâ€™s exactly why itâ€™s one of the countryâ€™s top ten destinations. Here you will find absolute solitude and peace.

Swakopmund
The fantastically plosive Swakopmund is a city that oozes German colonial charm and is cherished by locals and visitors alike â€“ many streets retain their German name. It benefits from a cool location beside the Atlantic Ocean, and has developed into one of Africaâ€™s most popular adventure destinations. Of all the restaurants in Namibia, some of the finest can be found in Swakopmund, an excellent base from which to explore the rest of the country.

Kaokoland
A lot of people think that Africa is full of spear-wielding tribes. While this is not entirely accurate, there are a great many tribal cultures across the continent, and Kaokoland is an ideal place to see how these indigenous peoples live. The area is a majestically barren desert that sits just inside the Skeleton Coast, and is home to the Himba people that still live traditionally among the basalt mountain ranges. Take the opportunity to interact with them; you might even be invited to a meal – eating out Namibia wonâ€™t get more authentic than that!

Bushmanland
Bushmanland is the imaginatively named home of the Bushmen people, the last large community of San people, many of whom still live traditionally and in harmony with nature. This area is very sparsely populated, and few tourists make the venture, but those who do are richly rewarded with much to see in the way of culture and wildlife. The path doesnâ€™t get any less beaten than this.

The content and photos are not the property of BackpackingWorldwide.com but are used with permission.