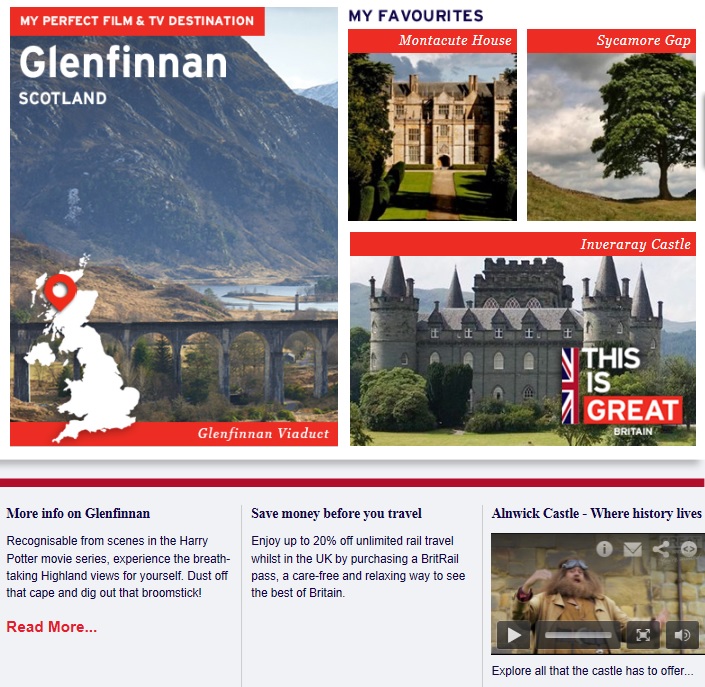 Great Britain’s parks and gardens are internationally known for their refined style, and as such, they have been featured in many TV shows and movies. Don’t miss our hand-picked selection of the UK’s most scenic film locations. 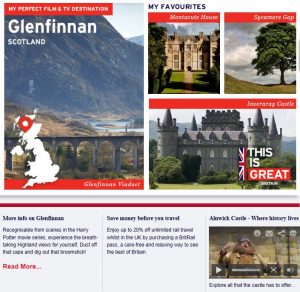 This widget can be found at; http://perfectukdestination.visitbritain.com/

Thanks to their unmatched beauty and dramatic scenery, the Scottish Highlands are a natural film location. Visitors will recognise parts of Fort William, Glencoe, and Glen Nevis, as they appeared in several acclaimed movies like the Harry Potter series, Braveheart, and Rob Roy.

Sycamore Gap is an incredibly peaceful and scenic spot located in the western side of Hadrian’s Wall. Surrounded by rolling hills and commanding spectacular views of the Northumberland countryside, it is hardly surprising that this location was chosen to appear in Kevin Reynolds’ 1991 film Robin Hood: Prince of Thieves.

Rosslyn Chapel and its surrounding gardens are often considered one of Scotland’s most stunning historical locations. The chapel was founded in 1446 and took 40 years to be completed, mainly due to the large number of sculptures, carvings, and architectural details that it features. The enigmatic character of this building made it the ideal location for the filming of Ron Howard’s mystery thriller The Da Vinci Code.

This romantic National Trust location was chosen as the backdrop to Mr Darcy’s first marriage proposal in period movie Pride and Prejudice. The magical combination of exotic plants and classical architecture of this stunning garden has not failed to impress visitors since it first opened its doors to the public in 1740, so make sure to stop by next time you visit Britain.

This post has been brought to you by VisitBritain.Â