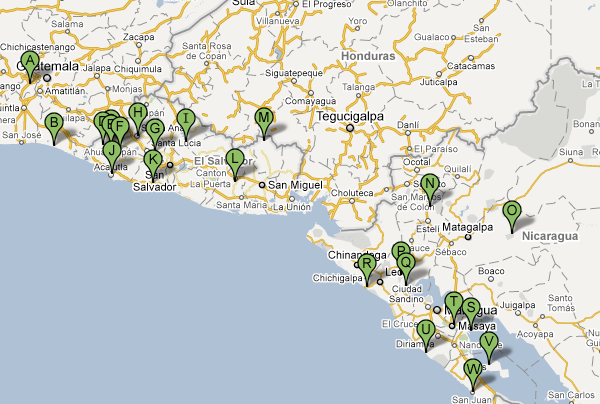 On January 6th of next year I’ll be flying back to Central America for the second time in 6 months. I spent 5 weeks in Guatemala, Belize, and Honduras last summer and am incredibly excited to get back to Central America. This time my trip will take me on a brief visit back to Guatemala before I head south into El Salvador and eventually Nicaragua, to experience, what some say, are two of the most travel worthy countries in Central America.

The map above is a brief outline of some of the places in Guatemala, El Salvador, and Nicaragua that I plan to travel to. I haven’t figured out the order of most of these stops but I’ve read enough about each one of these cities that I know I want to make sure I spend some time in them. So here is a brief breakdown of my Itinerary.

Note – Next to each city name that I mention I’ll include the letter that corresponds to the location of the city on the map.

Guatemala
-I’ll land in Guatemala City in January 6th and head straight to a city close to my heart, Antigua(A).
-The next day I’ll head to Montericco (B) on the coast of Guatemala for some black sand beaches and Guatemalan beer!
-During this portion of the trip I’ll have a friend with me who I’ll need to take back to the airport so I’ll return to Antigua (A) and spend a few days showing him my favorite sights, as well as hopefully exploring some new ones. And then, it’s off to El Salvador!

El Salvador
This is where the schedule gets really loose. I know some of what I want to see, but have no idea how long I’ll spend in each area or if I’ll be adding and subtracting stops as I go. I really don’t have any plans here and I’ll be searching for couchsurfers, cheap hostels, and maybe, just maybe, even some cheap hotels as I’m traveling through if their prices are low enough. If you know of any good places to stay, feel free to send me a message as I slowly plan my route. But for now, here is what I’ve got….

-Just across from the Guatemalan boarder is the Ruta de las Flores, which is a 36 km string of small towns that are famous for their food festivals and the abundance of wild flowers that cover the hills between the towns. I hope to eat a lot of great food and get some awesome photos of the area while I’m hear. The towns I’m planning on visiting on the route are Ahuachapan(C), Ataco(E), Juayua(F), and maybe another small town or two. For those of you who have been there, feel free to leave some suggestions in the comments
-There are also a number of towns and sites around the Ruta de las Flores that I hope to visit that aren’t technically on the route. They include Tacuba(D) and the nearby national park, Santa Ana(H), the UNESCO World Heritage Site of Joya de Ceren(G), the beaches of Playa Atami(J) and the distant town of Suchitoto(I). All of these stops are in the western half of El Salvador and will keep me busy for a few weeks most likely.
-After these I’ll begin heading east making a stop at one of the beaches near La Libertad(K), possibly El Tunco which has been highly recommended to me.
-Finally, I’ll end my time in El Salvador with some relaxing in the mountain town of Alegria(L) and some lessons on the history of El Salvador and its recent civil war in the town of Perquin(M).
-I’ll cross over from El Salvador to Nicaragua by bus most likely, but am exploring any boat options that exist so let me know if you know of any!

Nicaragua (I should note, some of the map pins are off a little bit but you can read the names)
-Depending on where I cross the boarder into Nicaragua I’ll either be heading to the town of Esteli(N) or the town of Leon(P)
-While near Esteli I’ll also visit Matagalpa(near O) and while near Leon I’ll visit the UNESCO World Heritage Site of the Ruins of Leon Veijo and the nearby beaches of Las Penitas(R).
-After exploring these parts of northern Nicaragua I’ll be heading south to the towns of Masaya(T) and Granada(S). I’ll probably take a short trip from Granada(S) to the beaches of La Boquita(U) or something nearby.
-After some time on the beach I’ll head back to Grananda(S) where I’ll make my way to the volcanic Ometepe Island(V) in the middle of NIcaragua’s largest lake.
-I’ll most likely end my time in Nicaragua on the pristine beaches of San Juan Del Sur(W) soaking up some sun and enjoying this picture perfect beach town.

At this point in time I’ll either be flying home from Managua, the capital of Nicaragua, or possibly heading south in Costa Rica. It really depends on how long I’ve spent at all of the stops listed above. If there is time to head into Costa Rica I might try to take a trip down the Rio San Juan from El Castillo into Costa Rica. We’ll see how adventurous I’m feeling once I get to this part of the trip.

So there it is. My plan for my 2ish months back in Central Amerca.

As I’ve mentioned a few times in this post, this is a very rough itinerary. It is based off of about an hour or two of browsing the internet and reading other peoples posts from these areas. I’m always looking for suggestions of place I should be sure to visit, whether they are completely different towns, or just your favorite restaurant or bar in one of the locations I am already stopping in. Please feel free to comment and let me know where else I should visit. My favorite way to plan my travels is by hearing from people who’ve already been to these areas.