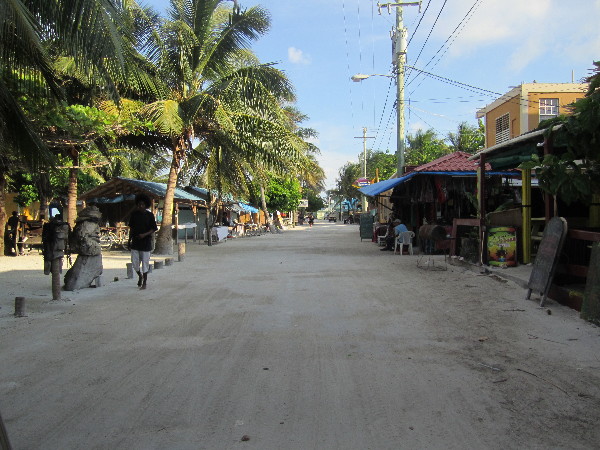 For the past 3 days I’ve been in Caye Caulker, Belize, which is an island located just off the mainland of Belize. Â Throughout the trip so far, whenever we had met someone who had been to Caye Caulker, and we mentioned the fact that we were going, we were told, “be sure to just go slow”. Â It was almost as if “go slow” were some sort of password we would need to get onto the island. Â Many people explained that this is an island were people take their time in life and we should expect an extremely laid back atmosphere. Â I’m not really sure if laid back describes it, it still seems a bit too intense of a description for this island . Â Lets put it this way. Â There is not a single paved road, I have yet to see a single car, the island is filled with bikes and golf carts, and “rush hour” consists of a few extra bikes swerving in an out of the people slowly meandering down the main streets. Â “Go slow” is not just a motto here, it is a way of life, a way of life that we have been happy to live by for the past few days as we soaked up the sun and soaked up some of the best rum punch we’ve ever gotten our hands on.

Today, however, I decided to switch it up from the normal routine of restaurant, beach bar, restaurant, pool, restaurant, night club. Â I decided to rent a golf cart to explore the parts of the island we hadn’t seen, in other words, everything but the 6 blocks the bars are on. Â I had been told the island was 10 miles long, so renting a bike was out of the question for me as I planned to cover the entire island. Â During my trip I realized, however, that either a majority of those miles were hiding from me, or the half drunk guy who told me it was 10 miles long was mistaken.

The plan was to spend the first half of my trip just driving and exploring the island, basically finding the best photo opportunities, and the second part, the trip back home, stopping and actually taking the photographs. Â This plan didn’t quite work out in my favor.

I reached the end of the island about 20 minutes into my 1 hour rental, which left me plenty of time to stop and take some pictures on the ride home. Â Unfortunately, as I turned the golf cart around and began the journey back home the cart began to sputter and lose momentum. Â No freaking way can this be happening… Â I instantly realized this golf cart was about to die. Â I drove on for another 3 or 4 minutes, skipping some spots I had wanted to stop in order to try and make it back into town, but eventually, my golf cart’s battery succumbed to its inevitableÂ death.

My first thought was what the hell do I do now? Â I am easily 3 or 4 miles from town and I don’t really want to leave this thing just sitting here and be liable for it. Â But then I realized, this was not my fault, and all they had on me was my name and $10 so screw them. Â I decided my best bet was to walk back the way I had come and just tell the people who had rented me the cart where they could pick it up. Â A minute or so into my walk though, I was stopped by a man. Â He asked “Weren’t you driving a golf cart when you first drove by here?” Â I explained to him the situation and he said he would bring his charger over to the cart and give me enough juice to make it back into town. Â Awesome.

He charged up the battery a bit and sent me on my way. Â The only real negative of this situation is I didn’t feel comfortable stopping at any of the spots I had planned to stop at in case the battery died again. Â The only photographs I got were taken as I was driving by certain spots, which obviously didn’t result in any amazing shots. Â I got the golf cart back to the rental yard and told them what had happened. Â They were very apologetic and refunded half of my money. Â It turns out that their son (who was only about 9 or 10) had brought the wrong golf cart up from the back and they had (obviously) given me one that was far from fully charged.

All in all, it wasn’t that bad of an experience thanks to my helpful stranger. Â Chances are if I had had to make that entire walk back to town this post might have been riddled with a few more curse words.