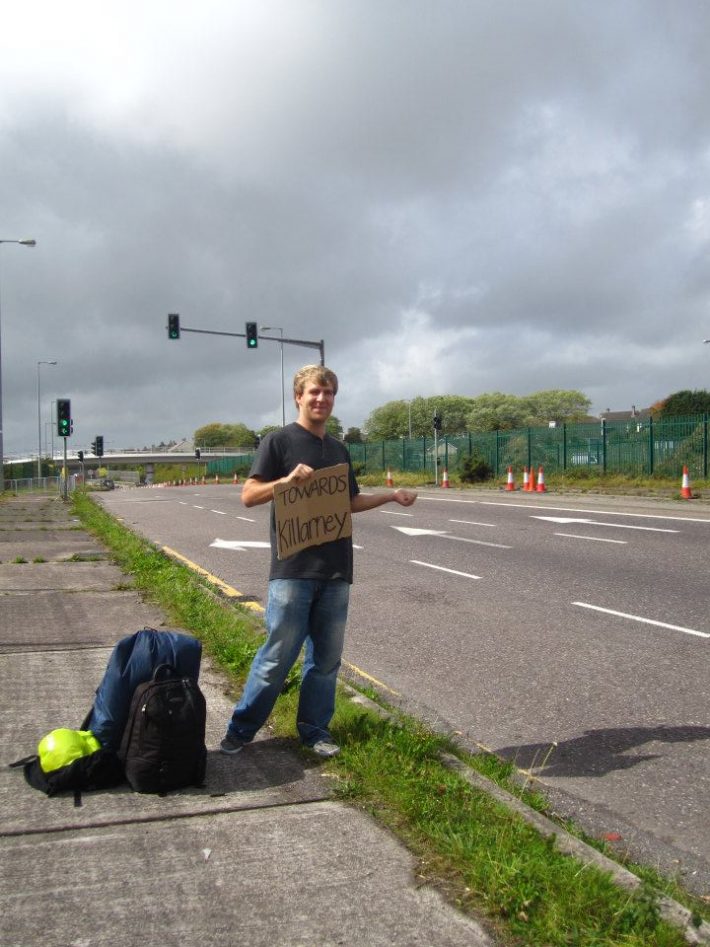 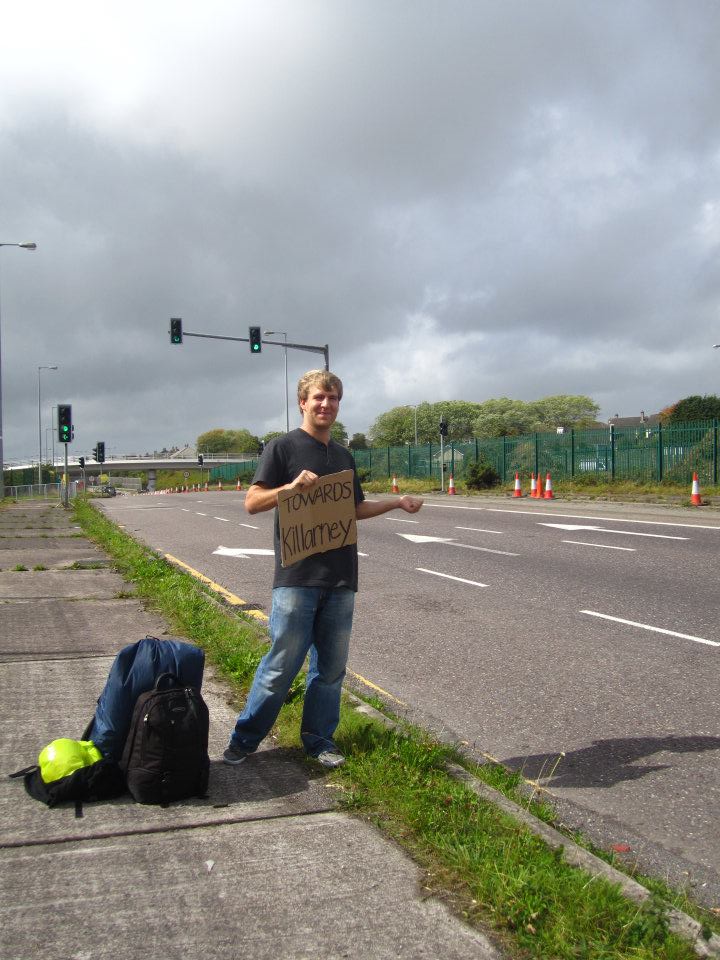 “Fine! But if anything happens I am going to kill you.”Â This was Danielle’s way of agreeing to try hitchhiking with me, and you can bet I heard this statement, or received the “look of death”, a few times during our ten days in Southern Ireland. Money was a bit tight, and we had a three night stay in Paris for our anniversary planned and we didn’t want to have to be on a tight budget then, so something had to give in our daily travel budget. Public transportation was outrageously expensive in Ireland and we obviously couldn’t cut out trips to the bars, so hitchhiking seemed to be a reasonable solution.

I’d hitchhiked quite a few times during my two and a half months in Central America at the beginning of this year, but Danielle had never even considered doing it. After some research, a few discussions with some new local friends, and a short trial run that involved being picked up by some grandparents on a way to a wedding, she eventually gave in to the reality that we were about to hitchhike across Ireland. Â Not to mention thoseÂ cheap ticketsÂ that were advertised everywhere turned out to be not so cheap.

But this isn’t a story about our entire journey through Ireland. This is a story about the part of the journey that went wrong, because, well, that is the part that you want to hear about most right? It turned out that hitchhiking with a nice, cute, sweet looking girl was WAY easier than doing it by yourself, and we were usually picked up within five or ten minutes of trying to catch a ride. We’d caught rides with a mother and her ten year old daughter, some grandparents on their way to their nephews wedding (all decked out in wedding attire as well!), a student on his way back to university, and a 75+ year old women who had lived in the states for most of her life but had returned back to the mother country to be with her family in her old age. There was one day, however, when we almost were completely stranded…

We set out and covered about 50 kilometers (35 miles) in under an hour, getting three different rides along the way. Things were looking good, and at the end of our third ride we were dropped at small stretch of road with beautiful lakes on one side, and the ocean and a B&B on the other. I was feeling lucky and decided we should keep moving on and simply walk the road as we tried to catch our next ride. This, unfortunately, was the plans fatal mistake…

After 30 minutes or so of no ride we came to a fork in the road. To the right, the coastal road and a few small towns. To the left, the mountainous road, and a shorter way to our end goal. I remembered the map I’d looked at that morning showing a small town the way of the mountainous road, and decided that would be both more scenic and more direct. I was right about the scenery at least…

Before we knew it we were in the middle of acres and acres of fields, farms, and hardly any houses. The views were stunning, and in hindsight maybe even worth the trouble we were about to face, but the cars passing by us weren’t the friendly Irish that we’d grown accustomed to catching rides with, most were tourists who had no interest in offering two strangers a ride. We walked on, with our bags growing heavier and the road getting steeper by the minute, as time slowly crept by. After over an hour and half we reached the “town” I’d seen on the map. It consisted of a closed post office and then a few houses scattered throughout the mountainside above us. No one in sight. No B&B for us to stop at. No directions to be had. No shelter from the storm that was rolling in from the ocean.

The wind began to whip and almost blow us over, as the worst rain we’d seen since landing in Ireland set in for the night. There we were standing in the middle of nowhere, with nothing to do but keep walking and try to catch a ride from any and every car that came past us. This continued for over an hour. We were completely soaked, freezing cold, and Danielle was starting to have some bad pains in her left foot. Road signs told us the next major town was five kilometers away, but seeing as how we’d already walked between ten and twelve kilometers, I just wasn’t sure if we could make it. I was started to get a bit frantic. I began throwing my thumb out for cars going in either direction. I’d abandoned the hope of getting around the Ring of Beara, and all I wanted to do was get us back to a dry, warm place to sleep for the night, even if that meant going back the way we’d came.

As I began to lose all hope and come to the realization we might be walking the remaining five kilometers a utility truck pulled off the road up ahead. I immediately thought to myself that maybe this was a local who might know where a close by B&B or some other form of cover might be. To my surprise when I got up to the truck the man was clearing out his front seat. He wasn’t stopping for some last minute work before his day ended. He was stopping to pick up the two soggy Americans who were stranded in the middle of his beautiful countryside. We graciously hopped in as he pumped up the heat and kept asking if Danielle and I were warm enough. I don’t think I’ve said thank you more times in a thirty minute span than I did during that ride. He offered to take us anywhere on the peninsula, as if his own plans didn’t matter. He drove us between 50 and 60 kilometers to the other side of the Ring of Beara, and dropped us off in front of a hostel. He was our saviour for the day. A complete stranger who we will never see again, but who we’ll talk about, and silently thank, each time we tell this story.

Our time in Ireland was as close to perfect as it gets. Much of this was thanks to the generosity of the Irish people who picked us up throughout our journey. During our ten days in Southern Ireland we…
-Were picked up by 11 different vehicles
-Hitchhiked over 200 miles (325 kilometers)
-Met 15 people who gave us rides
-Saved somewhere close to $400 in travel fares

Running a blog is hard work… No doubt about it. The last thing any of you potential bloggers want to worry about is hosting problems. I recommend checking out the best wordpress hosting article from my friend’s website to learn more about your hosting options. If any of you ever have any questions about blogging for me, please send me an email on my contact page.