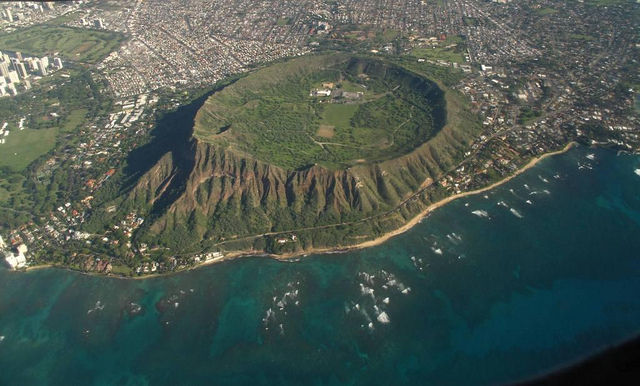 You are lucky enough to find yourself staring out at miles of crystal blue water from the warmth and comfort of your chaise lounge on the beach; the soft tumble of the waves lulling you into a dreamlike state. This is Hawaii, and you’re experiencing what millions come to enjoy on an annual basis. Few who have found themselves in a similar situation, however, stop to wonder how it is that this magical place has risen up out of the depths of the Pacific Ocean over the last 70 million years. Without the volcanoes that make up this island chain, the buzzing culture, historical significance, and picturesque tropical landscapes evade us. The famous Hawaii cones are a sight to behold, and for the motivated island hopper, it’s the perfect way to take in a tremendous amount of this Pacific paradise. Here are some must-see volcanic spectacles that will give you a further appreciation of everything else that Hawaii offers.

Dominating the Oahu skyline is Diamond Head Crater, an extinct volcanic tuff cone that has become a hiking favorite for tourists and locals alike. Moments away from a slew ofÂ Honolulu hotels, this site was used as the first United States military base all the way back in 1909, as well as a game show! Whether you’re a history buff, a pop culture fiend, or are just looking to break a sweat while laying eyes on some spectacular views, paying this volcano a visit is certainly a must.

If you’re hoping to catch a glimpse of some magma, fresh from beneath the earth’s crust, there may be no better place on earth to do so that Mauna Loa on the Big Island. This huge active volcano is the world’s largest, and has been erupting constantly now for hundreds of thousands of years. It is part of the Hawaii Volcanoes National Park, where you will find other active volcanoes showcasing one of the earth’s great phenomenon.

Making up 75% of the island of Maui is Haleakala, a huge shield volcano that has great significance to Hawaiian culture. The area was believed to be the home of the grandmother of the god Maui by early Hawaiians. Now, it is used for a variety of things, including one of the world’s most famous observatories. Hiking to the peak is no easy task, as the elevation and the temperature can present a challenge to even the most experienced of adventurers. If you’re looking to get your blood pumping, however, look no further!