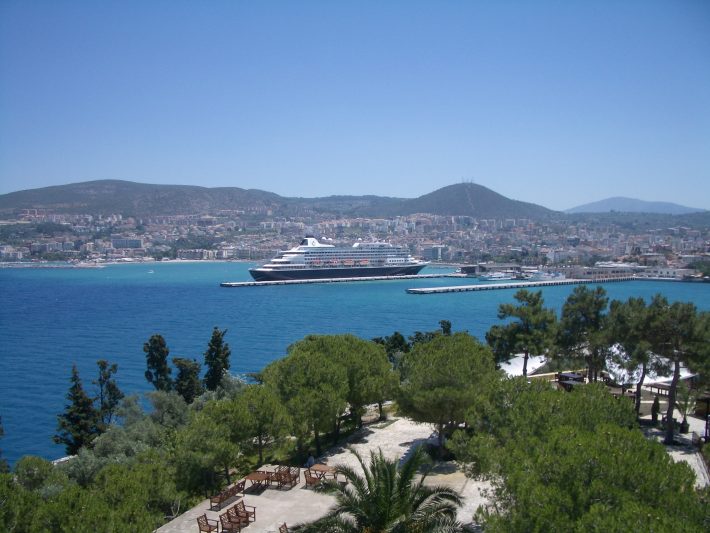 Do you love a dose of culture with your beach break? The Mediterranean coast may be home to the most popular resorts for holidaymakers, but the Aegean coast of Turkey is a great bet for travellers looking for more than sun, sand and sea. From the ancient Roman city of Ephesus â€“ home to the Temple of Artemis â€“ to the stunning resort of AlaÃ§ati, there’s more than enough to keep even the most active of traveller’s happy.

What’s more, there’s always plenty ofÂ cheap holiday deals on offer for wallet-watching holidaymakers looking for a bargain. The flight time is a very reasonable three and a half hours from most UK airports. This combined with the plethora of activities, beaches, culture and attractions on offer in the region, makes the Aegean coast of Turkey an ideal family destination.

Kusadasi is one of the most popular resorts in the Izmir region of Turkey. A sophisticated resort, it is famed for its many sandy beaches, 300-plus sunny days annually and variety of hotels and attractions. Meaning ‘Bird Island’, the resort is surrounded by stunning azure seas and historic sites, including the famous Roman City of Ephesus – home to the Temple of Artemis (completed around 550 BC), one of the Seven Wonders of the Ancient World. A site of huge historical importance, Ephesus was one of the ‘seven churches of Asia’ that are cited in the Book of Revelation.

Izmir
Izmir itself is referred to as ‘The Pearl of the West’, Turkey’s third largest city after Istanbul and Ankara. With a history stretching back over 8,500 years, it’s a great location for those interested in history. There are a number of attractions to explore, including the Clock Tower (Saatli Kule), the symbol of Izmir – built during the Ottoman Era – and the House of Virgin Mary. For those after sun, sand and sea, there are a number of coastal towns near to Izmir to visit, such as AlaÃ§atÄ±, Seferihisar, Foca, Karaburun and Urla.

Cesme Peninsula
The Cesme Peninsula – an hour’s bus ride from Izmir – is ideal for those that like a slightly quieter pace of life and is one of the most relaxing of the central Aegeanâ€™s main coastal spots. A hotspot for Turkish tourists and windsurfers particularly – due to the stiff Aegean breezes – it is an up-and-coming resort for discerning travellers, with plenty of boutique hotels set amongst stunning landscapes. The quaint village of AlaÃ§ati is a highlight, and is fast becoming a luxury resort to rival the very best in the country.

Gumbet
This is the place for those that like to soak up the sun during the day and hit the best bars and clubs by night. Known for its great hotels, amenities and nightlife, this coastal resort is located in the popular Bodrum region, in the Mugla Province. This once unknown retreat, surrounded by turquoise seas and rolling hills, has been transformed into a holidaymakerâ€™s paradise and is one of the most popular tourist resorts in Turkey.