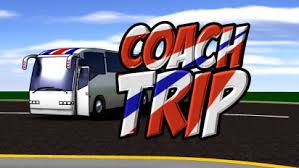 You may be aware of a reality TV show in the UK called “Coach Trip”, where couples partake in a coach tour of various places around Europe, while facing the threat of eviction (after all you have to have competition in a reality TV show). If you’ve watched it, you’ve probably thought “I wish I could do something like that.” Well I have good news, you can! And all for a very reasonable price.

If you’re travelling around Europe, the chosen method of getting from A to B tends to be by aeroplane. It’s quick and for the most part relatively hassle free. Then there’s the Eurotunnel between London and Paris, which for many is still a very novel way to travel. If you’re after a cheaper option however, you can travel from, for example, London to Paris by coach for just £40 ($70) return. Considering that in the UK it costs around that much to travel the relatively short train journey from Leicester to London, that’s a pretty good deal.

Of course a coach has its drawbacks, it will take a lot longer than a journey by plane or train (around seven hours) and sods law will dictate that you will be sat next to a stressed out woman with two hyperactive children but on the other hand, travelling by road means you can appreciate the various picturesque views that will be available to you during your journey. Yes, when you go on a plane you are treated to fascinating aerial shots of the city below, but for the majority of the journey, all you get to see is clouds. It would feel somewhat like a road trip, except rather than drive, you can pick up a book, put on some music and just relax. Just make sure you don’t miss out on any of those views! After all, travelling by coach gives you the opportunity to take in some beautiful towns, cities and villages.

The majority of coaches also contain WiFi and plug sockets, so those of you who like to spend long journeys playing on your phone or even doing work on a laptop, there’s plenty of opportunity to do that. The stereotype of a coach journey tends to be of cramped, hot, sweltering conditions but times they are a changing and nowadays one can travel in a comfortable and relaxing environment.

As with any travelling excursion, it’s always wise to insure your trip which is why I’d recommend checking out HBF Travel Insurance. Therefore if anything happens that you haven’t bargained for, you can be well supported and continue your journey with a smile after any hiccups.