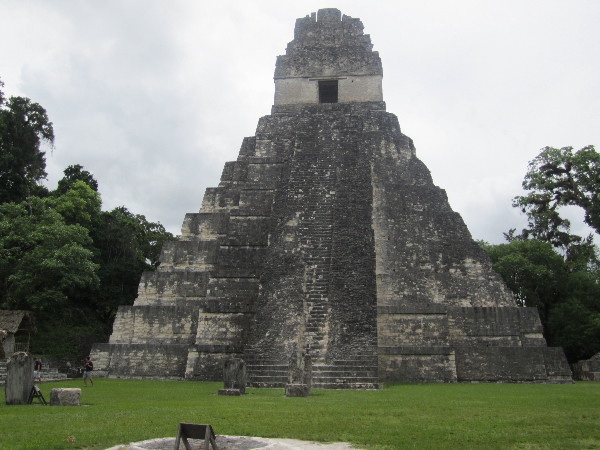 Another early morning today. Our bus left for Tikal National Park here in Guatemala at 4:30am this morning. Or at least it was supposed too… In typical tour company fashion they were 15 minutes late. We arrived in Tikal about an hour and a half later and from there set off on our adventure exploring the Mayan city state of Tikal.

Tikal is known, not only for its giant Mayan Ruins, but also for its wildlife. Our guide, Caesar, made sure to tell us all about the history of the Mayans and Tikal, as well as point out any wildlife he spotted. We were able to see an array of wildlife including a couple of animals whose names I don’t know, a toucan, and spider monkeys. No howler monkeys were out today though, but you could hear them in the distance. Caesar went fairly in depth on the history part of things so I’ll probably do a more in depth write up on the history of Tikal and the Mayans once I’m home in July or August but for now I’ll show you some pictures and tell you a little bit about Tikal.

Today Tikal is made up of multiple temples and other smaller buildings that area surrounded by the Guatemalan jungle. At the time of the reign of the Mayan civilization, however, the city was almost completely cleared of trees. The buildings are all made of a concrete mixture that is made from limestone. Limestone is normally a very brittle stone when dried because of the amount of moisture that it normally holds but the Mayans go to extra lengths to prepare the stone for building, which has allowed the temples to remain standing for as long as they have, which has been a long time! All of the buildings we saw today were built between 600 BC and 900 AD.

Well, enough of the boring stuff. Now i’ll show you some pictures of the Mayan ruins and the wildlife around the park.

I was also able to take this short video of a family of spider monkeys making their way through the trees. They were quite hard to capture on a still camera but I think this is even better. In the background you will hear our guide talking about them a bit as well as everyone else in the group.