Yesterday was easily the longest day of the trip so far, but also one of the most rewarding. We woke up at 6am to get ready to meet a guide we had hired for the day at 7am. For 250 Quetzales ($31.25 U.S.) our guide was going to take us in a private shuttle to the nearby town of Santa Clara where we would hike up Indian’s Nose (one of the most popular overlooks of Lake Atitlan), visit our first Guatemalan market, and go ziplining through the mountains surrounding Lake Atitlan.

We decided to do the hiking first, as it was early and we thought it would be cooler at that time of day. The hike proved to be quite a challenging one for us Florida boys who rarely even deal with hills, but we finally made it to the top for what proved to be the best view of Lake Atitlan we had had yet. Before I show you some pictures, I leave you with one word of advice. If you decide to make this hike during the rainy season in Guatemala be sure to wear old crappy clothing because, even if it isn’t raining, there is a good chance you are going to bust your ass in the mud like me! Anyways, here are some pictures from the hike.

After the hike we took our sweaty, tired, and dirty selves (I wasn’t the only one who fell) down to the Santa Clara market. We were able to grab some delicious fruit and other foods as well as see the locals in their element as there were very few tourists in the market. 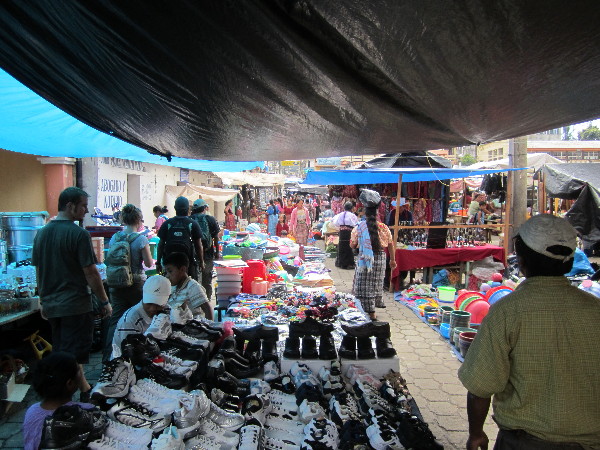 Finally we headed back up another mountain (this time in our shuttle thankfully) to try out ziplining! For most of us it was our first time, and getting to do it with views of Guatemala below, and even through clouds at some points was quite an experience. I was able to video tape some of the action, so I hope you enjoy!
*The laughter at the beginning was because I am an idiot and nailed my ass on the board I was supposed to jump off of*
[youtube]http://www.youtube.com/watch?v=Ypx6h4lqBT0[/youtube]

By the time we made it back down the mountain after ziplining it was only 12:30pm…. We still had a long day of traveling ahead of us as we planned to leave San Pedro and Lake Atitlan and travel towards the Tikal ruins of Guatemala. We left San Pedro at about 3pm, caught a 4 hour shuttle to Guatemala City, and then took a 10 hour overnight bus ride to Flores, Guatemala where we are now. We’ll be heading to Tikal tomorrow to visit the ruins and I might try to do a post later today with a quick tour of the tiny island town of Flores.