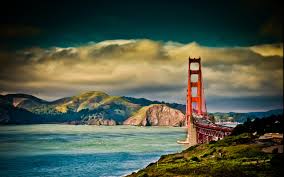 Journeying around the central coast of California is on the bucket list of many a traveller. If youâ€™ve ever dreamed of driving down the Pacific Coast Highway along Big Sur with cliffs and crashing surf merely a stoneâ€™s throw from your seat, read on!

The Central Coast broadly refers to the region between San Francisco and Los Angeles. The journey between the two is often rated as one of the best drives in the world, and for good reason. The scenery is uniformly stunning and given Californiaâ€™s generally excellent weather, itâ€™s an experience which is hard to better. For more details on the Central Coast, see the Central Cost Tourism website.

While the journey can be made in one day, itâ€™s a long drive at 380-odd miles and you wouldn’t have time to explore. A car is essential to get around due to the scarcity of public transport; Alamo car rental in California is one option and of course there are other companies operating in the state as well.

The old fishing town of Monterey, near San Francisco, is worth a stop. It hosts the Monterey Bay Aquarium, one of the foremost aquariums in the world. From there, keep driving just south of town to the famous 17 Mile Drive, where you can drive around the spectacular coastline upon payment of a small toll.

Pismo Beach is an attractive seaside town with a wooden pier and a large area of dunes. The more adventurous traveller can hire quad bikes and ride to their hearts content over the dunes.

Santa Barbara is what many people picture when they think of California â€“ a beautiful beachfront town with a laid back vibe, an amusement park on the pier and palm trees everywhere! Make sure to explore the main street, State Street, which is full of interesting shops and restaurants.

For those who prefer the country to the town, there are a number of state parks where you can leave the car for a while and explore. The highway also has a number of stopping points where you can admire the view. If youâ€™re lucky, you may even spot a beach full of elephant seals sunning themselves, or a hummingbird collecting nectar.

In short, a journey through Californiaâ€™s Central Coast will not disappoint anyone! Thereâ€™s so much to see and do there, youâ€™ll wish you had twice as much time.