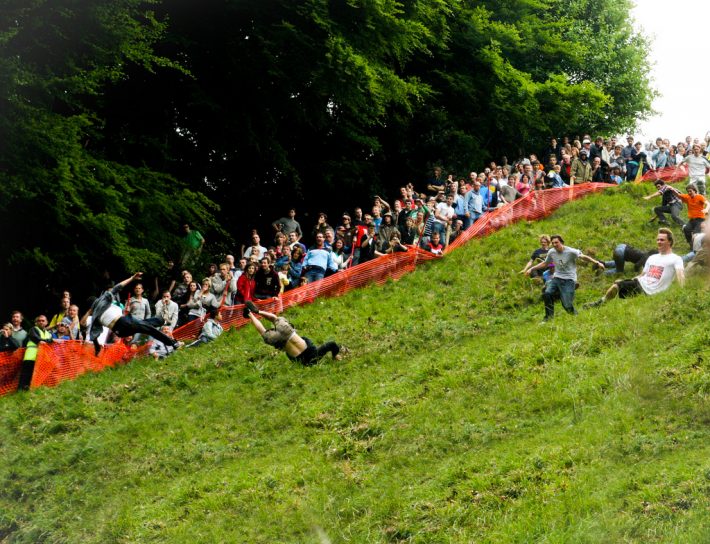 The UK is home to many weird and wonderful and truly varied events and a trip to the UK just wouldnÃ­t be complete without seeing some of them. Almost every weekend there is something happening somewhere, so whether you are holidaying in the British countryside or visiting for the day, get off the beaten track and have a look!

This rather strange sounding event takes place in Upperthong at the Village in June each year and involves participants throwing a Wellington boot as far as they can into the air. Either a standing or running start is allowed but there are strict rules that competitors must abide to, including the rule that no artificial or manmade wind is to be used, but entrants can wait for up to one minute for a suitable gust of wind to help their wellie along its way!

Although there are no formal records stating when this event started, it is thought that the tradition of cheese rolling at Coopers Hill is at least 200 years old. A round cheese is rolled down the hill and competitors race down after it. Nowadays the cheese used is a double Gloucester cheese weighing approximately 8lb. The event has had some struggles to keep going over the years and even had to resort to using a wooden cheese during the food rationing of WW2 with just a tiny piece of cheese inside it to preserve the cheese rolling tradition. In more recent times the event has some under some criticism for the injuries including sprains and falls sustained by some entrants but year on year the cheese rolling event is becoming more and more popular with people desperate to be part of it.

Gurning is quite possibly one of the strangest activities a person may wish to take part in! It basically involves distorting your face to make it look as strange and frankly ugly as possible! This annual event, where having no teeth is an advantage, has been taking place at EgremontÃ­s Crab Fair for many years – the fair itself has origins back to the 13th century and its thought is one of the oldest fairs in the world.

The Great Knaresborough Bed Race has been taking place annually since 1966 and is now one of the largest community events in the north of England. The event is basically a race whereby a team of six people carry a bed and a passenger decorated in that particular years fancy dress theme through the town and even across the river.