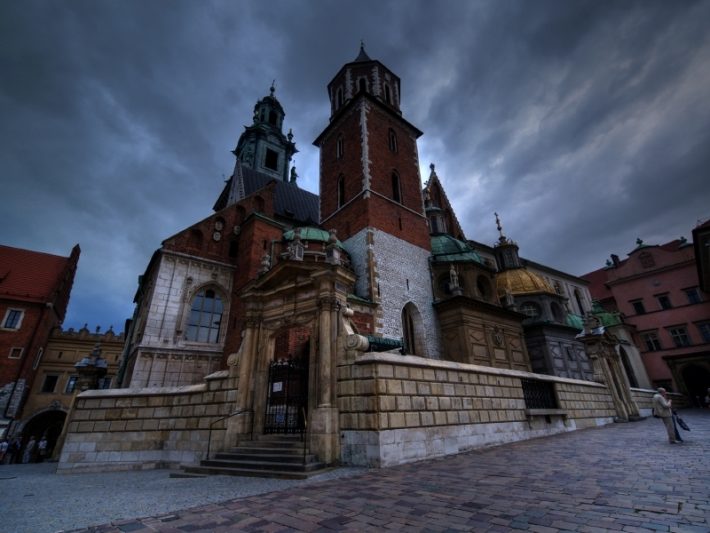 This week’s “Top Ten Tuesdays” post is by Leon Levy, and provides ten things to do in the city of Krakow. Krakow is the capital of Poland, the home to numerous festivals all year round, it is deemed a UNESCO World Heritage site, and it is near the location of Auschwitz, a symbol of one of Europe’s darkest times. Here are ten things to do during your visit to Krakow.

Wawel Hill
The 11th Century Royal Castle and grandiose Wawel Cathedral are revered by Poles and a must-see for any visitor to the country. Polandâ€™s main national treasures are found here as are the priceless art, furniture and commemorations to the Polish Royal Family. Many Polish kings were buries in the Cathedral as well as the national greatest heroes, saints and bishops.

Bar Culture
The nightlife of Poland centres around the main centre of Krakow and is very popular with revellers from other European counties such as Britain, Germany and Russia. Polish bars are friendly and well known for having some of the best draft beers east of Berlin.

Czartoryski Museum
Founded as a â€œTemple of Memoryâ€ in 1796 by Princess Izabela, this incredible museum preserves the cultural heritage of Poland and other curios from across the world. Highlights include Shakespeareâ€™s chair, the ashes of El Cid and the supposed grave of the tragic lovers Romeo and Juliet â€“ as well as numerous books and other treasures.

Jewish Quarter
The old town of Kazimierz in Krakow is enjoying a cultural resurgence since the Jewish community returned to its traditional home beside its Catholic neighbours. There are quaint traditional houses, historic synagogues and a hub of cafes. Visit during June and youâ€™ll be treated to the Jewish Cultural Festival with concerts, workshops and plays.

Wieliczka
These 200 kilometres of salt mine passages, 2,040 caverns and 20 underground chambers include the worldâ€™s largest museum to mining. This subterranean wonder is a 135 metre-deep UNESCO world heritage site which began life 900 years ago when some of the carved chapels date were created. Get lost in winding passageways and wonder at the beauty of underground lakes.

Auschwitz
This monument to European historyâ€™s darkest chapter – the Holocaust â€“ attracts over a million visitors to Poland each year. Tragically an estimated 1.2 million Jews, Romanis, political prisoners, homosexuals and disabled people were killed by the Nazis in this concentration camp during the Second World War.

John Paul II Route
The late John Paul II is certainly the most famous modern Pope and a proud figure in Polandâ€™s still strongly Catholic cultural and religious life. The city of Krakow has a cultural tour where visitors are shown significant places in his life.

Polish Cuisine
Try famous dishes such as zurek soup â€“ really a kind of heavy broth with egg, meat and vegetables â€“ or for the brave, golonka, translated as pork knuckle which is made up of a layer of fat and meat straight off the bone. You can also find the traditional street food â€“ giant pretzels served by ladies from their eye-catching blue trollies.

St. Maryâ€™s Alter
Krakowâ€™s main Square houses this amazing alter to the Virgin â€“ the centre piece being a 13 meter high 15th Century gothic alter-piece. This is the largest gothic sculpture in the world â€“ visit at noon and youâ€™ll catch the sun as it shines through the incredibly detailed stained glass windows.

Krakow Festivals
There are hugely popular festivals almost any time of the year â€“ the Christmas market provides a dose of winter comfort from the end of November until the New Year, when the Old Town comes alive to herald the year to come. Then carnival season begins followed by Lent and All Foolâ€™s Day, in spring. After that thereâ€™s St Stanislawâ€™s Procession, Juwenalia, Corpus Christi Procession and the Enthronement of the Cock King and Garlandâ€™s midsummer festival. In autumn enjoy the Andrzejki festival, All Saints Day and Milokaj or St. Nicolasâ€™ Day.