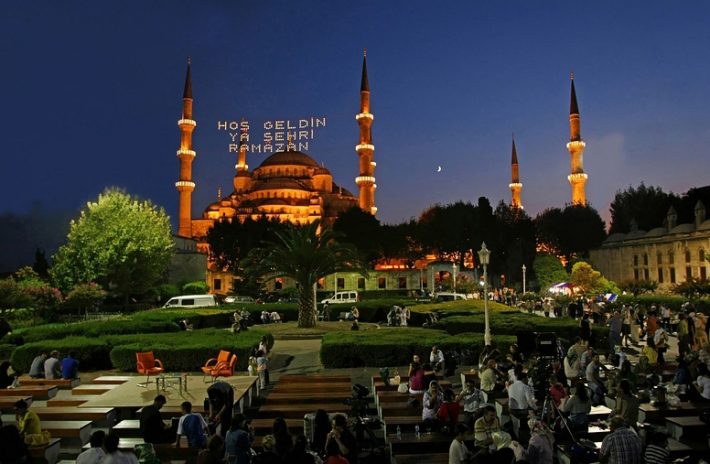 The next guest post in my “Top Ten Tuesdays” is about the beautiful city of Istanbul, Turkey. My guest writer, Kirk Shackelton, had the pleasure of visiting from London, and as you can see below, he truly enjoyed his stay.

A giddy excitement overcame me as I sat on the short flight that had left London three hours earlier, heading towards a place that had long been the object of my travelling desires. My destination was Istanbul, a megacity which occupies an exclusive fascination in my mind alongside Sydney and Rio de Janeiro as cities I mistakenly think are capitals. This I learnt only from the in-flight travel magazine twenty minutes before landingâ€¦ talk about doing your research and being prepared! Nevertheless, I am a staunch believer in unprepared travel â€“ it makes the whole thing even more exciting, and creates a whole series of surprises. Here are the top ten things to do in Istanbul:

Explore Sultanahmet
The historical centre of Istanbul boasts many of the cityâ€™s biggest attractions, and few tourists can avoid spending a significant proportion of their visit here. Nor should they wish to. Take in the splendour of the Blue Mosque, Hagia Sophia, the Basilica Cistern, the Istanbul Archaeological Museum, the Byzantine Hippodrome, the Turkish and Islamic Arts Museum and Topkapi Palace. And donâ€™t forget to take a deep breath first!

Sail the Bosphorus
Like most great cities, Istanbul, Turkeyâ€™s largest metropolis, focuses upon a large body of water – the Bosphorus. This strait separates the landmasses of Europe and Asia, connecting the Black Sea with the Sea of Marmara, and is the vein from which Turkeyâ€™s capital city grows. There are numerous public and private ferries departing from EminÃ¶nÃ¼ that take passengers up and down the channel and offer a unique perspective on the city, from palaces and Ottoman mansions to sleek cafÃ©s, restaurants and bars.

Cross to the Asian Side
Istanbul is a city of two halves, one European and the other Asian, and no visit is balanced without experiencing both. Getting to the Asian Side is simple – just jump aboard one of the ferries that frequently crosses the Bosphorus, or walk across the bustling Galata Bridge. Once on Asian turf, thereâ€™s plenty to see, including Beylerbeyi Palace, Maidenâ€™s Tower and BaÄŸdat Caddesi.

Visit a Mosque
Istanbulâ€™s skyline is dominated by the slender minarets and bulbous domes of its numerous mosques, graceful places of worship that feature prominently in most peopleâ€™s travel itineraries. Not only are they a visual spectacle, the calls to prayer which sound five times a day provide an audible backdrop for the city. Unsurprisingly, Istanbul is home to the most mosques in Turkey, including many which are famous throughout the world, such as the Blue Mosque and Suleymaniye Mosque.

Brave a Bazaar
To get a sense of how Istanbul was a few centuries ago, visit one of its bazaars. These ancient shopping malls teem with vibrancy and life, and are the perfect place to pick up a souvenir from your time in Turkey. The Grand Bazaar and Spice Bazaar are particularly popular, selling a plethora of spices and sweets within a cauldron of noise that is an assault on the senses. Remember that haggling is a way of life here â€“ donâ€™t be scared to negotiate fiercely.

Smoke Nargile
Ever since the Ottoman Empire in the 17th century, nargile smoking has been a popular form of socialisation and relaxation for Turks of all ages, and those seeking to immerse themselves in Istanbulâ€™s local culture should not miss the opportunity to try it. Numerous nargile cafÃ©s drape the city in smoke flavoured by tobacco that is mixed with molasses, having been filtered by a basin of water and sucked through a winding hosepipe. Originally from India, nargile smoking has become deeply ingrained in Turkish culture.

Discover the Princesâ€™ Islands
The Princesâ€™ Islands arenâ€™t the personal properties of a group of princes, as you might be forgiven for thinking, but rather a chain of nine islands that lie off the coast of Istanbul, in the Sea of Marmara. They offer relief from the casual chaos of Istanbul, free from cars and replete with cobble streets and quiet waterfront restaurants. Donâ€™t miss the opportunity to take a ride in one of the islandsâ€™ famous horse and carts, which are the best way to see all that these picturesque places have to offer.

Attend a Whirling Dervish
Whirling dervishes are deeply spiritual displays that ooze elegance and magic, featuring a group of dancers clad in white skirts that flare outwards as they spin with their arms raised upwards and consciences aligned with God. The ritual is a celebration of existence, and a deeply personal experience for those who witness it during their visit to Istanbul, with many establishments across the city making this possible.

Unwind at a Meyhane
Of the many places to eat in Istanbul, meyhanes are the most authentic. These tavernas, which translate literally as wine houses, serve drinks along with meze and other Turkish foods, often against a backdrop of traditional music which creates an exciting cultural experience for any tourist in Istanbul. Be sure to try raki, Turkeyâ€™s national drink, alongside a plate of hummus.

Relax at a Hamam
Turkish hamams have evolved into a global phenomenon, but the best place to visit one is still in Istanbul. You are guaranteed to leave feeling invigorated, purified, and totally relaxed, having been cooked like a runner bean in a steamer through a series of rooms that vary in temperature, beginning in hot rooms that encourage perspiration, before entering cooler rooms that allow the body to relax. This is often followed by a massage.

Visa for turkey can be applied online.