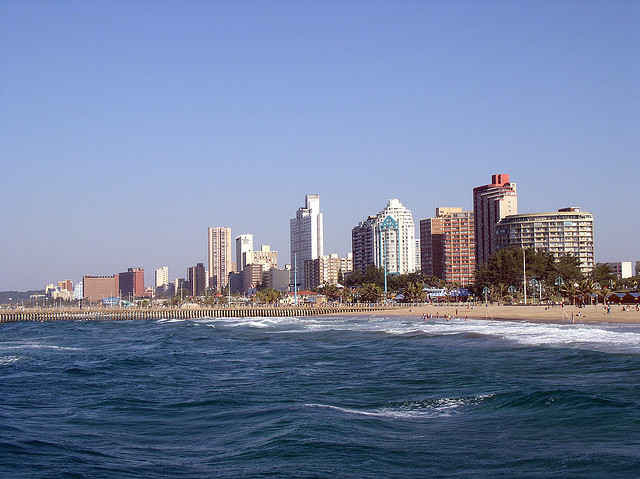 On the east coast, in the third province of KwaZulu Natal, lies the beautiful city of Durban. Durban, meaning â€œbayâ€ or â€œlagoon,â€ offers so much to travelers year round. It said that winter, surprisingly enough, is the best time to visit! Endless sunlit days, comfortable daytime temperatures, and clear skies make this location a prime spot for the holidays!

Here are 5 top things to do Durban:

Each year, during the months of May through August, billions of sardines migrate up the KwaZulu-Natal coast creating an incredible ocean water-feeding phenomenon. Coming to be known as â€œthe greatest shoal on earth,â€ this rare experience is exciting for divers, birders, whale watchers, and spectators galore. Golf tournaments, half marathons, jazz festivals, food and wine festivals and so much more are all packed into these four thrilling months of celebration of Mother Nature.

One of the largest marathons in the world, the annual three-day Hansa Powerade Dusi Canoe Marathon is a popular activity of its people and travelers. The race has evolved from its original completion, in 1952, into an international sporting event with widespread media coverage, the first of the year. Each February, over 2000 men and women of all ages race the Msunduzi (Dusi) River, attracting 2000 supporters and media with them. The first man, Ian Player, to complete the 120 km route in 1951 said that nobody who has ever completed the race will ever be the same again. The thousands of participants since then have all agreed.

Comrades Marathon is a celebrated event, unlike any other in the world. The race originally came from a First World War veteran who wanted a living tribute to the South African soldiers that were killed in the war. The race is an excruciating test of great physical durability of all its participants. Since the first race in 1921, the marathon has laid out years of will power and achievement for all contenders. Starting with only 34 participants for its first race, it now has close to 13,000 applicants with only three fourths of those finishing the allotted 12-hour race!

Umhlanga Rocks Beachfront is a beach resort with an upmarket sophistication and is decorated with many luxury beachfront complexes, hotels and high-rise buildings. The tradition of luxurious resorts dates back to 1869 when Umhlangaâ€™s first beach cottage, the Oyster Lodge, was developed. Tea and scones were served to travelers passing through and its reflective roof served as a landmark for fleeting ships to travel safely around Umhlangaâ€™s rocky peninsula. Serving as the basis of great hospitality, many hotels and resorts have mirrored Oyster Lodgeâ€™s philosophy since.

The Golden Mile is the most popular attraction of Durban and is Durbanâ€™s main beachfront. It runs between the south part of the coast at uShaka Marine World to the north side near the Suncoast Casino and Entertainment World with endless golden sands along the way. The Golden Mile is said to be South Africaâ€™s Miami Beach, with a multicultural vibe and a vacation atmosphere. The Golden Mile was even named one of the top ten family beaches for vacationing!