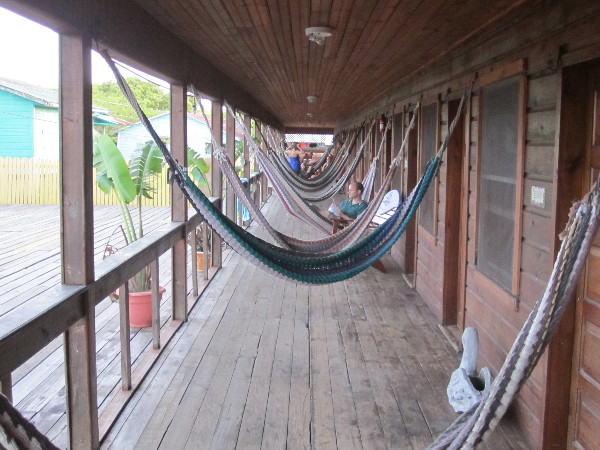 There are many types of organizations that have some sort of right of passage that new members must go through. People experience this in things like sports clubs, making it to the varsity football team, fraternities and sororities, and sometimes even being the new employee in a workplace. These rights of passage also exist in the world of Scuba Diving.

For the past four days I have been on the island of Utila, Honduras. Utila is one of the Bay Islands just off the east coast of mainland Honduras. It is known as a diving haven for experienced divers and those wishing to become certified divers. It is one of the cheapest places in the world to get your certification as well, which makes it a very popular place with a constant flow of changing faces. There isn’t a lot to do on Utila besides drink, snorkel, catch some rays, or diving so many people who come here decide to partake in diving courses, including me.

Like many other groups in life, the professionals of diving are an elite group, and membership in their ranks is not easily attained. There are three levels of certification one must complete before even attempting to become a pro. After completely these three stages you are eligible to attempt your Dive Master course, which basically enables you to work at dive shops and lead customers out on diving adventures. Dive Masters also have the option of additional training to reach the Instructor level of diving.

During my time hear I have learned of quite a few very interesting rights of passage that take place in this dive community. The first is a ritual that takes place when a person completes their Dive Master courses and first become a professional diver. The new pro is put on display in front of a crowd of people, given a snorkel which they place in their mouth, a funnel is attached to the snorkel, and then the bar tenders and people around the new pro pour anything and everything they can find into the funnel as the poor guy attempts to chug it. I got to witness this last Monday, and lets just say it was quite a sight to see. The young Australian guy who was going through this was treated to a mixture of tequila, beer, tabasco sauce, and best of all, a raw egg… And if that wasn’t enough, a second raw egg was simply cracked over his head and rubbed into his hair. It was great enjoyment for all of us watching, but the look on the young mans face definitely told a different story. But it didn’t matter how bad it was, because when it was over, he was one of them.

I’ve also had the pleasure of viewing, hearing about and experiencing first hand a few other traditions. The first, one I’ve only heard about, is the tradition of the 100th dive, which is supposed to be done in the nude (except for the necessary equipment of course). I’ve met multiple individuals (guys and girls) who are working their way towards this 100th dive and thoroughly excited about doing it naked…. No thanks, one of the first things they taught me was not to have anything dangling from my gear.

The other traditions I’ve witnessed involve the simply act of the more experienced divers giving less experienced divers a hard time. This includes my personal experience of being told to float for 10 minutes as they let me slowly drift away from the boat, soon realizing how much I had to swim back. It was an endurance test supposedly, but they all seemed to get quick a kick out of it. I also saw a girl who had just completed her rescue course get a nice surprise when two dive masters jumped overboard and started faking drowning (very obviously) as everyone on the boat yelled for her to save them. She had to gear up after just taking it all off and save them, and ever better, as she is climbing in the boat after two successful saves, a third dive master jumps in… Poor girl.

I’m really enjoying myself here in Utila, and have a lot to learn from the people here. Not just about diving, but about living life one step at a time. Some of the people here showed up to take one diving course, and have been here for over a year, while others have turned this lifestyle into a living, and they are loving every minute of it. I don’t know how much longer my stay will be, certainly not as long as I’d like, as I have got to start heading back to Guatemala soon.