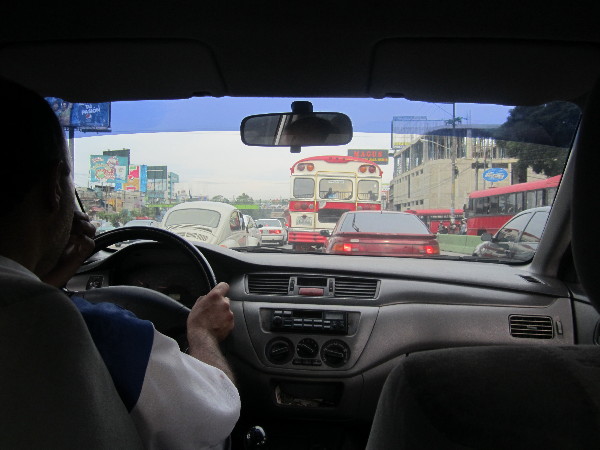 Yesterday I purchased a ticket from Copan Ruinas, Honduras to Guatemala City, where I will be meeting my girlfriend in the morning for the last week of this trip. I gave the guy at the desk an address of a hostel I had reservations at and asked if I could be dropped off there. He said there was absolutely no problem with that but I’d need to pay an extra $5 since the shuttle did not normally go to that area. I knew that a taxi from the normal drop off point at the bus station was $6 so $5 seemed like a reasonable amount to pay. He told me to be out from of my hostel in Copan Ruinas no later then 11:30 to be picked up by the shuttle.

At 12:30 the shuttle finally turned onto the street I was waiting on. Instead of driving down the hill to where I was the driver simply honked his horn a few times and motioned for me to come to him, you know… since driving down a hill is a lot harder than walking up one. Once in the shuttle I clarified that I was to be taken directly to the hostel and he replied “Si Senor”, and I contently sat down for my 5+ hour ride.

Once in Guatemala City we pulled over on the side of a busy road and our driver hopped out and went over to a line of taxis. He began talking to a taxi driver and pointing back towards the bus. By this time I knew that I was the only one being dropped off in Guatemala City and that everyone else was continuing on to Antigua, about 45 minutes outside of the city, so I quickly realized that the shuttle driver was getting a taxi driver to drive me the rest of the way.

Soon the shuttle driver motioned to me to get out of the shuttle and in a combination of english and spanish he explained exactly what I had assumed. This wasn’t a huge issue as he was taking the extra money I had paid and using that to pay for the taxi. I hoped in and began the trip to my hostel…. or so I thought…

It turns out the shuttle driver had simply told the taxi driver to drop me off near the airport, which is somewhat correct since that is where the hostel I wanted to go to is located, buttttttt, that didn’t really get me where I wanted to go. I showed the taxi driver the address I wanted to go to, he stared for a bit and then simply shrugged his shoulders and said, in Spanish, “We go to the airport.” I sat back in my seat, with absolutely no way to possibly communicate where my hostel was, and decided I’d simply call the hostel from a pay phone once I arrived at the terminals. It was a great plan… but unfortunately pay phones at airports isn’t a guarentee around here.

After attempting to communicate with some of the taxi and shuttle drivers at the airport that “I needed a public phone” one of them final got the message across to me that there wasn’t one anywhere nearby, and he simply pointed down another road. I turned, a bit defeated, and began my trek through a city known for not being tourist friendly. Luckily one of the drivers ran up to me and, in Spanish, asked me if the call was to someone in Guatemala or somewhere else. I had no idea what he was saying but after a few slow repetitions I finally got it and quickly replied, “Si Si, Guatemala City!” He smiled, took out his cell phone, and handed it to me. He saved the day. I called my hostel and they came with their free airport pick up van and before I knew it I had arrived at my home for the night. My “direct” shuttle had turned into a shuttle, a taxi, a 2 block walk (oh yea, the taxi driver didn’t even get me all the way to the airport), a desperate phone call, and a minivan.

A month ago, when first arriving in Central America, I would have been confused, frusturated, and annoyed at my situation today. I’ve slowly come to realize that these things are going to happen when I travel, and they will probably happen often. I’m ok with that, and now view these obstacles as a challenge I have to overcome. Where there is a will, there is a way, as I proved today, and will probably have to do again and again. Oh yea, and I need to learn Spanish…